The NCAA has not looked credible lately.

The very last thing that politicians in the states that are figuring out whether to approve legalized sports gambling need to hear is the NCAA President Dr. Mark Emmert talking about the prospect of sports gambling causing a college sports integrity issue. Under Dr. Emmert’s watch there was the case of Jerry Sandusky who was convicted of rape and child sexual abuse. There were sexual abuse problems at Ken Starr’s Baylor University. There was also Larry Nassar, the USA Gymnastics team doctor who was sexual abusing some of his patience. While Dr. Emmert has nothing to do with USA Gymnastics, Larry Nassar was employed by Michigan State University, a member of the NCAA, and prosecutors in the case against Nassar said Michigan State University stonewalled investigators. There were whispers for years that something was going on with Nassar and the gymnasts. Then there is the federal investigation of corruption in college basketball. Dr. Emmert recently told delegates at an NCAA convention that they need to have “values-based bold leadership” as the group faces issues in the future. Just how is the NCAA going to act boldly and strongly? Ask states to rescind sports betting?

Dr. Emmert did not show much bold leadership in the wake of the Sandusky case nor did he show much values-based bold leadership in the Baylor situation nor did he show bold leadership with the Nassar case. What kind of bold leadership is Dr. Emmert going to show lawmakers? Have the NCAA police legalized sports gambling? Demand an integrity fee? Statehouses have been laughing at that notion. If Dr. Emmert is worried about players throwing games and the industry surviving that, he doesn’t know his organization’s history with the 1950s betting scandals. College basketball survived. Perhaps to make sure college basketball players are not throwing games, the NCAA should start paying the performers. 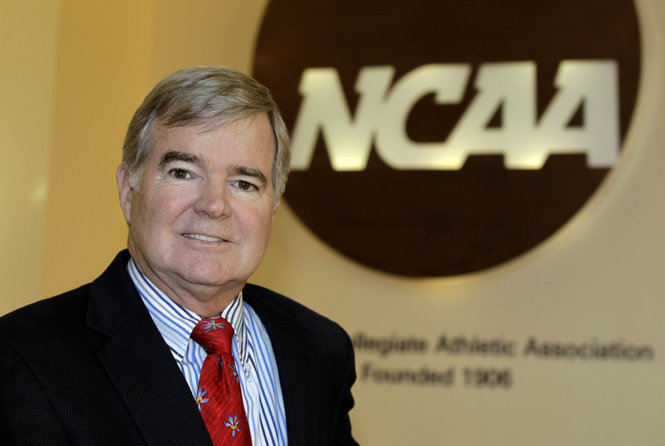