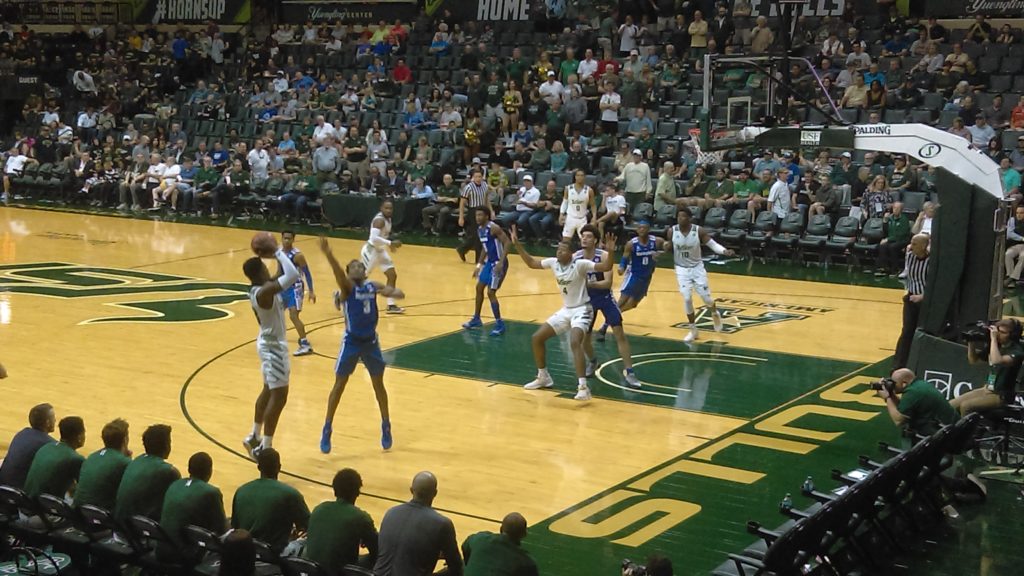 TAMPA – A resounding opening half that saw USF take a 27-1 lead turned into a game with some anxious moments late in what would be an 84-78 win over Memphis at the Yuengling Center on Saturday afternoon.

The victory, in front of an announced crowd of 4,573, gave the Bulls (15-6/5-4 American) their first three-game conference win streak since 2011-12 when they were a member of the Big East. It also lifted them above .500 in conference play with nine games remaining.

Led by David Collins’ 16 points the Bulls led 38-13 at the half, a half in which Memphis shot 4-for-28. USF came out in the second half and committed 10 turnovers in the first nine minutes and saw their lead dwindle to 52-41.

Memphis (13-9/5-4) was able to whittle the deficit to single digits on multiple occasions in the final five minute and made it a six-point game on Jeremiah Martin’s layup with 18.3 seconds remaining. That basket closed the scoring and were Martin’s 40th and 41st points of the half after going scoreless in the opening 20 minutes.

As the game progressed through the first half, suspense was building with respect to how long the Bulls could continue to pitch a shutout. Indeed, the Bulls scored the first 19 points before Tyler Harris sank one-of-two free throws to put Memphis on the board 6:21 into the game.

The Bulls’ lead swelled to 27-1 on a pair of David Collins free throws before the Tigers finally got their first field goal on Kyvon Davenport’s three-pointer 9:49 into the contest.

“The first half was a nightmare,” said Memphis coach Penny Hardaway. “The second half was our type of basketball. We have to figure out a way to start the game the way we ended the game.”

By contrast the Bulls could have used a much smoother second half. They turned the ball over 18 times in the final 20 minutes giving them 30 turnovers on the afternoon.

“We knew they were going to respond with their pressure,” said Gregory. “We didn’t do a great job of handling it at times and other times we did.”

Collins was held to four points in the second half to finish with a team-high 20. Justin Brown, who was 5-for-8 from three-point territory, had a career-best 19 points. Laquincy Rideau got into foul trouble and played only 22 minutes. He still had 15 points and five assists. His two steals gave him 68 to equal the program’s single-season mark set by Leon Smith in 1973-74.

Alexis Yetna left with a leg injury with about 14 minutes remaining in the game after a flagrant foul by the Tigers’ Mike Parks. Yetna did not return and Gregory kidded it is a “hockey lower body injury.”

The Bulls’ three-game win streak follows a three-game losing streak with each defeat by single digits against teams from the conference’s upper crust: Temple, Cincinnati and Houston.

Wins over Wichita State, ECU and Memphis have put that bump in the road well into the rear view mirror.

“We had a little rough stretch, but we showed some character by staying in those games,” said Collins. “We are going to keep working at it and eventually get the product that we want.”

The Bulls have been quite a product at home where they are 12-2. They travel to Dallas to play SMU on Thursday night and then return to the Yuengling Center to face ECU next Sunday at 5:30.