The Timing Of The World Baseball Classic Was Not Ideal

The world cares more than I do. Okay, I said. I think I’m admitting the truth, not just for me but for Americans. It’s a busy time of year. March Madness. NBA and NHL seasons winding down. NFL free agency. MLS season beginning. There is a lot on the calendar. Perhaps the die-hard baseball fans in the audience don’t care about the other things and the World Baseball Classic is center stage. But it isn’t for me. Honestly, I want to care, but I don’t have time for it. Too much else is going on.

And of course another event is ongoing: Spring training. That’s right. Training.  Baseball is trying to hold a tournament to determine the best country playing baseball as the players are training. Not in mid-season form, but training. Does this make sense to anyone?

When the Winter Olympics come around, you know what the NHL does? It takes a time-out. Same for the NWSL and ladies playing for gold medals in the summer games and the men playing for a World Cup. Baseball should follow suit. Baseball is a world-wide game. Have you even been in a major league clubhouse? A 25-man roster may have 15 different nations represented. Very unique experience. Baseball, and by baseball, I mean Major League Baseball needs to call a timeout in the middle of it’s season if they truly want the WBC to matter to the USA and considering the WBC is played in the USA, then they should care.

First of all, in July the calendar is pretty empty for sports fans. It’s baseball and soccer and that’s it. They’d be center stage. Instead of a one-week break for the all-star game, give them a 2 week break for the WBC. This year, in the states, games started on the 9th and the event wraps up on the 22nd.

Secondly, instead of pitchers last 2-3 innings like it’s the All-Star game, they could actually pitch games like they’re starting during the season because they’d be in mid-season form. More guys may be willing to play as well because of the timing of the event.

I can see other nations care. I can see the players care. I want to care. 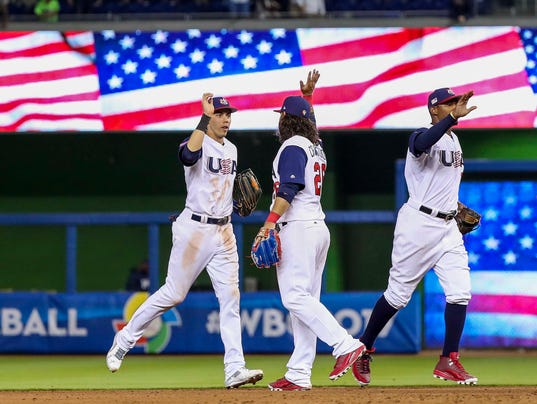 If Rob Manfred cares about the health of the sport, and wants baseball to make a real splash, generate real interest, and wants the WBC to be viewed a true world championship with the pomp and circumstance it deserves, then moving the event to July and disrupting the MLB season must be done.