The game changed the NFL.

On the morning of January 12, 1969, there was some question about the legitimacy of the newly named Super Bowl. After all, the Green Bay Packers had won the first two American Football League-National Football League World Championship contests and the long established NFL had to be better than the AFL which just finished its ninth season. The NFL’s Baltimore Colts were thought to be a much more superior team than the opponent, the AFL’s New York Jets. Baltimore would just continue the NFL’s dominance and perhaps the whole Super Bowl idea was becoming a folly. But Joe Namath, the Jets quarterback said there were five AFL quarterbacks better than the Colts Earl Morrall and guaranteed his team, the Jets, would win. It made for some drama but Namath was dismissed by sportswriters who covered NFL teams as a loud mouth with long hair who wore white shoes. The actual Super Bowl wasn’t much of an event. There was a flimsy pre-game show featuring a marching band. The Apollo 8 astronauts, Frank Borman, William Anders and Jim Lovell who had just circled the moon two weeks earlier led the crowd in the Pledge of Allegiance. The national anthem was performed by a trumpet player. The Florida A and M University marching band performed the halftime show.

Namath and his teammates did back up the guarantee and beat Baltimore and all of a sudden, the Super Bowl had stature. More than likely Namath is in the Pro Football Hall of Fame for one performance. His team won the Super Bowl in 1969 and changed football history. Eventually there would be cities bidding for the game, people would become interested in throwing Super Bowl parties. Super Bowl commercials and the halftime show would be must see TV and Super Bowl Sunday would become a quasi-American holiday and America’s most watched TV show. The game would also influence Arizona and national politics. Namath changed the course of football. 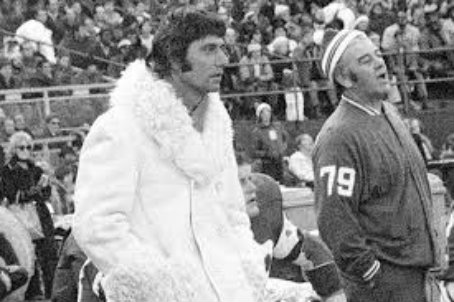