This was a good week for the University of Miami who beat a tough Georgia Tech 25-24 win at home Saturday. Meanwhile, both USF and UCF had lopsided wins at home, pushing all three teams up in this week’s college football rankings.

In the ESPN coaches poll the Miami Hurricanes are ranked an impressive 7th while they are 8th in the Associated Press poll this week. Only the defending National Champions from Clemson are ranked higher than Miami in the ACC.

Meanwhile, coach Charlie Strong and his University of South Florida Bulls are the 13th best team in the country in the ESPN coaches poll this week. That is the best rankings for a Bulls team has been ranked since they were No.2 in the country behind only the top-ranked Ohio State Buckeyes, this week in 2007.

The Bulls are tied with North Carolina State for 16th in the Associated Press weekly poll. They now are the highest ranked non Power 5 conference team in the country.

South Florida benefitted from San Diego State getting upset by Boise State this past weekend. They were two were two spots ahead of the Bulls in the polls last week.

In Orlando, the Central Florida Knights are making moves upward in the polls. In both the Associated Press and the ESPN coaches polls they are locked in the No. 20 spot. A strong move for a Knights team that is not that far removed from going 0-12.

Both USF and UCF need to keep winning to make their Thanksgiving weekend showdown in “the War on I-4,” to be a battle between two undefeated teams. But lurking in the offing is another American Conference team, 5-1 Memphis team is rolling along in the West.

Should either USF or UCF be able to end the 2017 season they would land one of the New Year’s Eve or day bowl games. For the record, they are the Dec. 29th the Goodyear Cotton Bowl Classic, the Dec. 30th Capital One Orange Bowl, the PlayStation Fiesta Bowl or the Jan. 1st Chick-fil-A Peach Bowl.

Anyone of those games would be a big-time payday for the AAC and help to push the idea they are the real Power 6 conference, on par with the Pac 12 or Big 12. Both of those conferences are the two weaker members of the Power 5.

VIDEO FROM THE AAC CONFERENCE 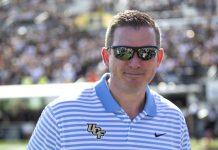