Cardoso was alone on the left of the lane as teammate Kiara Lewis airballed a desperation 3-pointer from the right wing. Cardoso caught the ball and quickly put it back up to beat the horn, with teammates mobbing her under the basket.

“She (Cardoso) had every reason to say, ‘she (Lewis) missed the shot, game’s over,’ and she just stayed with it, got the rebound, had the wherewithal to put the ball back up on the glass,” Syracuse coach Quintin Hillsman said.

That marked the first lead of the day for the fifth-seeded Orange (14-7), who trailed by 15 points in the first half. The game also included Syracuse scoring to beat the third-quarter buzzer as Emily Engstler hitting a running heave from a step shy of halfcourt to cut FSU’s lead to 55-52.

“In this game we had every reason to lay down, every reason to not be engaged in the second half of this game, but our kids really came out and played tough,” Hillsman said. “They played aggressive. We just made plays and just all the credit goes to them.”

The Orange will take on No.-5 ranked and top-seeded Louisville in a semifinal on Saturday.

Trailing 39-27 at halftime, the Orange outscored the Seminoles 25-16 in the third quarter. After her half-court basket to end the quarter, Engstler opened the fourth with another 3-pointer to provide the game’s lone tie. Bianca Jackson, who finished with 25 points, scored five in a 7-0 spurt to give the Seminoles (10-8) back the lead.

Cardoso led Syracuse with 16 points plus 13 rebounds, 10 on the offensive boards. Lewis added 12 points, Djaldi-Tabdi and Digna Strautmane 11 each and Engslter 10. The Orange shot 50% in the second half after just 29% in the first.

The Orange played without starting guard Tiana Mangakahia, out with a lower-body injury for the second straight game. They also lost starting guard Priscilla Williams, who was taken off the court with 2:50 left in the first half after she hit her head on the court while on defense.

“When you have that kind of injury, everyone is concerned and everyone is nervous, and she was, but she was really positive,” Hillsman said. “She looked at me and nodded her head that she was okay, and we just tried to finish the game off the best we could. It was tough, but we got through it.”

Only Jackson scored in double figures for the Seminoles, who defeated the Orange 67-52 in their only regular-season meeting on Feb. 11. 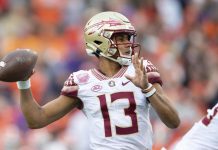