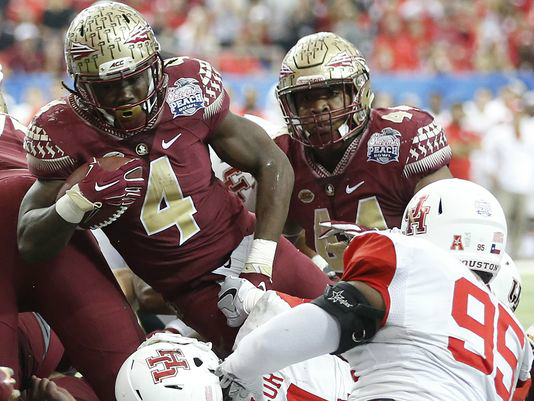 Very questionable decisions, every defensive pass interference call you could imagine, and poor play on the offensive side of the ball cost the Florida State Seminoles (10-3) the Chick-Fil-A Peach Bowl and the 50th win for the senior class as the ‘Noles fell to the AAC Champion Houston Cougars (13-1) 38-24.

Not to discredit the Houston defense, who played an absolutely stellar game, the Florida State offense sputtered and sputtered and could never get going. The offensive line issues reared their ugly heads again and the line couldn’t get a push to save their lives and Dalvin Cook could not get the ball rolling. Cook finished with 33 yards on the ground and lost his first fumble of the year. However, the rush defense is where the Cougars thrive.

Sean Maguire did not have a great outing, as is par for the course if the Seminoles are not playing in Tallahassee. Maguire was injured early in the first quarter with what seemed to be an ankle injury. In Everett Golson’s absence (he did not make the trip to Atlanta due to personal reasons) JJ Cosentino, the 6’4 239 lb redshirt freshman quarterback had to step in. Needless to say Cosentino was not prepared to step onto the field as he was sacked on consecutive downs and did not advance the offense even after FSU was granted favorable field position. Cosentino went 1-4 for 5 yards.

Soon thereafter Maguire came back from the locker room with some form of an apparatus on his ankle and finished out the game with a mediocre performance, going 22-44 for two touchdowns and a whopping four interceptions. Two of the interceptions came on deep routes that were under thrown and the others were on miscommunications or poor decisions from Maguire. While Maguire did end up throwing for almost 400 yards, it definitely didn’t seem like it as the Florida State offense sputtered all game.

Houston QB Greg Ward Jr had to battle a few injuries over the course of the game but still had an excellent performance, finishing as both the passing and rushing leader for the Coogs. Ward went 24-41 for 238 yards, one touchdown and one interception through the air and on the ground he carried the ball 20 times for 67 yards and two touchdowns.

Florida State ends its season on a bit of a low note with a loss in a bowl game for consecutive years, while Houston head coach Tom Herman finishes as one of the very few coaches to win 13 games in his first year at a program. One thing that should not happen however is for people to discredit the Houston Cougars, who played a stellar football game.

However, not all is lost for Florida State. From the beginning the year was considered a rebuilding year for the garnet and gold. Losing numerous players to the draft and trying to replace them with young talent. Some players shined for FSU as others maybe weren’t as good as advertised. Nonetheless the ‘Noles go into the offseason with a chip on their shoulders as they prepare to rebuild and reload.

Florida State opens up next season in Orlando facing of against Ole Miss on Labor Day.