INDIANAPOLIS – Dolphins running back Kenyan Drake is entering the third year of his NFL career but despite being a third-round pick in the 2016 NFL draft, Drake has had to bide his time before receiving quality snaps on offense.

Drake has just 166 career carries but he’s proven to be incredibly productive once he gets he hands on the football. The 24-year old running back is averaging 5.0 yards per carry in his two seasons in the NFL and conventional wisdom says he’s deserving of more carries, but not so fast…

Following the Jay Ajayi trade, the Dolphins have vowed to refrain from relying upon one running back to carry the load; Gase reaffirmed his stance on the running back position at the NFL Combine on Wednesday.

“We’re really not looking to be a [team] that’s going to have one guy where he has 20-25 carries,” Gase said. “We kind of want to spread it out; we like to use multiple backs. We started doing some things with other guys, even moving [wide receiver Jakeem Grant] in the backfield every once in a while.”

Miami could look to find a player in free agency who could share carries with Drake, but finding a cheaper, younger running back in the draft would be ideal. While there has been suggested that Miami needs a bruiser to complement Drake, Gase believes it’s important that the Dolphins find a running back that has a similar skill-set compared to Drake.

“I think anybody that can play all three downs. I think really that’s the biggest thing I look for. A guy that can run the ball, pass protection and catch the ball out of the backfield. That’s why Kenyan and Damien [Williams]… both those guys, we never really looked at either one of them as the starter. … They both started games and we felt good about both those guys being in there. I never really looked up to say ‘who’s in the game?’ It didn’t matter because I felt like both had complementary skill-sets and both those guys did a really good job. They fed off each other and they were happy for one another when they had success.”

The 2018 NFL draft is teaming with running backs capable of complementing Drake. Georgia’s Sony Michel, USC’s Ronald Jones and San Diego State’s Rashaad Penny are do-it-all backs who would do a fine job contributing in all three phases of the game: running, receiving and blocking.

Despite the fact the Dolphins are looking to add another body to its running back corps, the team is pleased with Drake’s development. According to Gase, he’s more prepared for games, taking better care of his body and is as fresh as a daisy after games he’s carried the ball 20 times or more. However, Gase believes there’s still room for Drake to improve.

“I think there’s a lot for him to still learn and he just needs to keep gaining knowledge,” Gase said. “He’s been watching other guys; I know that’s one of the things this offseason he was going to try to do was watch more film on other guys to see other people’s running styles and how they do things. I think the longer he plays in this league, the more he’ll realize, you have to stay with it, you have to study, you have to keep finding ways to learn. You can’t stay the same every year.” 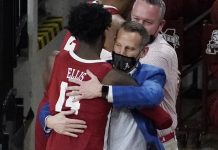