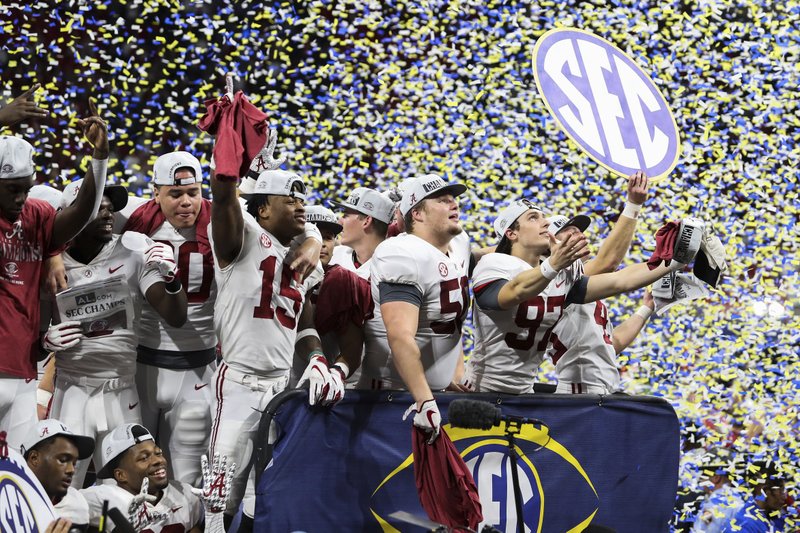 That sounds like coach speak or corporate-retreat lingo, but Crimson Tide coach Nick Saban and Clemson coach Dabo Swinney strive to make it a reality. It is the common thread that runs through the very different personalities leading college football’s most dominant programs. From social media to branding to career development to training table, every aspect of the organization is connected to success on the field.

Thad Turnipseed, Clemson’s director of recruiting operations and external affairs, has worked with both Saban and Swinney to implement their holistic approaches to building championship teams.

“Everything matters in every area of your program,” Turnipseed said Saturday at media day for the College Football Playoff national championship game. “That’s hard for a lot of programs to buy into. If you’re not willing to be the best at every single one of those categories, whatever it maybe, Clemson and Alabama are dedicated to that so we’re going to continue to move ahead.”

No. 1 Alabama (14-0) and No. 2 Clemson (14-0) will meet Monday night at Levi’s Stadium in Santa Clara, the fourth straight year the Crimson Tide and Tigers have played in the playoff and third time they will decide the title.

Turnipseed is a former teammate of Swinney’s on Alabama’s 1992 national championship team who was working as an administrator in Tuscaloosa even before Saban took over in 2007. Turnipseed oversaw facilities projects, but Saban expanded that role.

“He just started calling me out of the blue his director of football external affairs. I was associate AD for special projects. Nothing to do with Xs and Os,” Turnipseed said.

Analytics, recruiting, branding the program through graphic design, Turnipseed’s job was to build a structure for Saban’s process to thrive.

Swinney said: “I mean, he’s just been one of the best hires that I’ve ever made for sure.”

The first big project at Clemson was a massive restructuring of the recruiting department, using Alabama’s war-room evaluation as a blueprint and increasing staff from a handful to dozens of evaluators. The difference was Swinney wanted to place greater emphasis on how players fit Clemson’s culture, which flows from the head coach’s warmer approach and emphasis on a family feel.

Saban might lack Swinney’s personal touch and easygoing manner, but in his own steely way he is very much a players’ coach. When talking about his program, Saban constantly references the need to create value for the players.

“I think being successful is really the same formula, whether it’s as a football player or being an executive at Apple,” Saban said. “So we try to teach our players that, and hopefully some of the experiences that they sort of have competitively as football players can carry over and help them be more successful in life.”

ESPN announcers Chris Fowler and Kirk Herbstreit, who have called all four CFP national championship games, get a look behind the curtain at Alabama and Clemson more than maybe any other members of the media.

“The similarities are an absolute rock-solid top-down commitment from each school,” Fowler said. “They pour resources in, human resources, financial resources, incredible attention to detail. The recruiting machine at each school, they know that’s the fuel that keeps the engine running. They’re both great at it in different ways, different styles perhaps. The way they round up talent is what sets them apart.”

Herbstreit said Saban and Swinney have far more differences than similarities in how they set the tone for their programs. But the similarities are crucial to explaining their success.

“I think it’s the competitive spirit and drive that both these guys have,” Herbstreit said. “It’s the creativity of trying to change things while they have success, not allowing complacency to set in. I think that’s a big part.”

At Clemson, Turnipseed has overseen the building of Clemson’s $55 million Allen N. Reeves Football Complex, which opened in 2017. The one with a slide, which is definitely more Swinney than Saban.

Turnipseed took control of the food services in the facility to ensure higher quality and more involvement with Clemson’s nutritionists. To emphasize the work former Clemson linebacker Jeff Davis has done for years mentoring players and promoting community service, Turnipseed studied what Alabama does, as well as schools such as Tennessee and Michigan, and created P.A.W. (passionate about winning) Journey. Davis’ office is right at the front of the building.

“This culture that we’re building at both places, everything we’re doing benefits the student-athletes,” Turnipseed said. “We should be passionate about building the man before the athlete. That’s kind of what Nick does in his own and Dabo does in his own way.”