Bowl games on almost a daily basis are closing out the college football season.

Bowl season is coming to a close. There are a number of games to be played with the college football championship scheduled for January 9, 2017 in Tampa. College football may be a sport to some, but it is a business from the beginning of the season in August through the January finale and then there are some all star contests afterwards.

Football is the train that drives college sports. Some of the student-athletes started the year are performing in faraway places with football games in Sydney, Australia and Dublin, Ireland because that were the money for colleges was. But the players did not cash in as they are forbidden by some silly amateur status to get a slice of the pie.  Some coaches are making more money than the top elected officials in their state, like Iowa strength coach Chris Doyle who is taking home $595,000 this year which puts him on par with the Iowa offensive and defensive coordinators. It is not unusual to see football coaches at public universities being the state’s highest paid public employees. There are hundreds of millions of dollars of revenues that flow into college football programs. Cities now bid to get the college football championship and the bidding starts in the tens of millions of dollars.

But does that trickle down to the actual performers? The players? No. While head coaches get millions and assistants get paid handsomely, the real stars of the show, the players get a college scholarship and can get an education if they are not too tired from their real job, representing the school on a football field, and if they can get into a classroom as football takes up an enormous amount of time. While coaches’ salaries are uncapped, the players cannot make more than $2,000 off the field. The NCAA is afraid certain players may take golden handshakes or boosters no show jobs. There is also the long term health issue. Some football players’ injuries don’t show up until later in life. There is no long term health care from college sports sustained injuries. The players are fodder, they come and go and the college or universities forgets them after they leave the campus. The players should get something besides a scholarship as without them, there are no games, no trips to Australia or Ireland. Without the players no one will watch a strength coach. 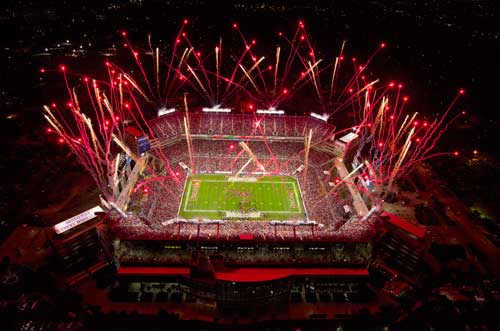 The college football championship game will be held in Tampa on January 8, 2017.

There are more than 40 college football bowl games taking place and that should raise a serious question. Why are there so many bowl games when just three should matter, the playoff games? The answer, of course, is money. Every bowl game brings money to a school and a conference and it gives a player another chance to compete in a game. But there may be another reason to play. Looking at the backgrounds of college football players brings up NCAA rules and how the NCAA could start asking about how a kid with really no money was able to fly home for the winter break. Depending on who paid for a plane trip, that could be a violation of the NCAA rulebook which is stacked against players and a school could face sanctions. The bowl games are scheduled during the winter break and there are practices and then the game so the players who don’t have much money don’t go home for the holidays because they are playing and that means there is no real reason for the NCAA to look at how a player gets home and back to school during a holiday break. Pretty simple to understand.

The player is getting no money yet the additional bowl games become TV programming and whoever is putting on the game on TV is getting money from marketing partners and if it is cable TV, from fees paid by subscribers who may never watch sports. There are those who claim, the players are getting scholarship money but the player is also limited to about $2,000 in salary in jobs away from the campus on a yearly basis. Then there is the constant abuse to the body that football players get. The NCAA has no long-range plan to take care of those players who are discarded and seemingly doesn’t care about used up student-athletes. Issues that the football industry is never asked about.