Chestnut Hill, MA- Boston College and #11 Florida State entered Sunday afternoon with one ACC win between them. In the only ACC game of the day, the struggling Seminoles and Eagles met at Conte Forum to try and reverse course. Behind a marquee performance by Ky Bowman, the Eagles struck a critical blow to the Seminole campaign.

Neither team had a good start, with three missed shots and two turnovers before a bucket finally fell. BC gained the early lead, but slumped after Mfiondu Kabengele, a red-shirt sophomore from Burlington, Ontario, emerged from the Seminore bench. Florida State then controlled the better part of the first half, ending with a 46-36 lead at break. Only Junior Ky Bowman’s electric performance kept BC afloat while FSU at one point led by 15. The Havelock, NC, native scored 18 of BC’s 36 points. Kabengele was one of nine different Seminole scorers, leding with ten points.

BC flipped the script in the second half, with the first four points of the half and a sharp three by Bowman to tie the game less than four minutes in. The Eagles got more help when Jordan Chatman drilled five of his seven three pointers to claim a lead that BC never relinquished. BC ballooned their lead to 14 point lead with 6:55 left before FSU whittled the deficit back to single digits, getting as close as four in the final minute. However, Bowman and Junior Nic Popovic combined to hit nine of ten free throws while Freshman Wyston Tabbs hit a dagger three to conclude the game. The two-thirds-full but rowdy crowd cheered their Eagles to an 87-82 victory, their first since beating DePaul on December 22nd and first home win since beating Fairfield on December 16th.

Ky Bowman finished with 37 points on 13-18, FGm 6-8 from three, and grabbed a game high 9 rebounds. Bowman’s 37 is his second best career scoring performance, only behind 44 points scored earlier this season against the Hartford Hawks.

Jordan Chatman, a senior transfer from BYU, pitched in 17 points on 5-11 FG and 5-7 from three. Tabbs added 12 points while Steffon Mitchell recorded an 8 rebound, 4 assist matinee. The Eagles as a team shot 13-21 from three point range, good for 61.9%.

“This is the ACC. There’s not one or two guys who carry any team. Everybody has to help for our team” said BC Coach Jim Christian of his team’s effort. “I walked in at halftime and said ‘We’re gonna win this game.’ We worked too hard to not win this game. We just gotta make some shots. Not taking anything away from Florida State, but we had practiced too well to lose this game.”

BC moves to 10-7 and 1-4 in ACC play, after facing Virginia Tech, Notre Dame, and Louisville all on the road and Virginia at home. They travel to play Wake Forest on Saturday, the 26th. Tip off at Joel Colliseum is at 4 pm against the Demon Deacons.

“You’ve got to congratulate them” said Seminole Head Coach Leonard Hamilton. “Anytime you play three of your first games on the road, that’s unforgiving, especially in the ACC. Early in the season, you can get yourself dug in a hole. This was a big win for them to stop the bleeding. Now we’ve gotta do the same thing. Hopefully we can find enough energy to play a very good Clemson team.”

The Seminoles drop to 13-5 and 1-4 in ACC play. The ‘Noles have now lost consecutive games in ACC play. They have a quick turnaround from wintry Boston to sunny Florida. Hamilton’s team hosts Clemson on Tuesday, the 22nd, and visits Miami on Sunday, the 27th. Tip off is at 7 pm against the Tigers and 6 pm at the Hurricanes. 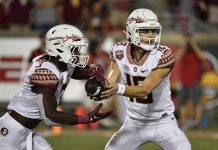