TAMPA — Lightning delayed USF’s much-anticipated opener by about an hour on Friday night.

The thunder came later in the form of Jonathan Taylor’s three first-half touchdowns, two of them via the air. The Heisman candidate added a fourth touchdown in the third quarter of Wisconsin’s 49-0 victory over USF at Raymond James Stadium in front an announced crowd of 46,704.

The loss was the Bulls’ seventh straight, equaling the program record bridging the 2012 and 2013 seasons.

“It hurts because we were humiliated and embarrassed at home in a nationally televised game,” said coach Charlie Strong, whose team suffered the largest margin of defeat in the program’s 22-plus seasons.

It was expected that Taylor would get his yards, and he finished with 135 on 16 carries, plus 48 on his pair of touchdown receptions. But after his fourth touchdown he had found the end zone more times than the Bulls had first downs, 4-3. It was that kind of night.

Many of the same mistakes that surfaced last season, even when the Bulls got off to a 7-0 start, hindered them repeatedly against the Badgers.

False starts, illegal motion, dropped passes and a delay of game before the first snap of a series were among the miscues that plagued an offense that had all of 101 yards, with five on the ground, through three quarters.

The Bulls, who did not have the services of slot receiver Johnny Ford due to what was believed to be a coach’s decision, finished with 157 yards and did not cross midfield until Jordan McCloud guided the offense to the Wisconsin 26 yard line on the team’s final possession. Alas, Coby Weiss missed a field goal attempt.

As we said, it was that kind of night.

“Wisconsin didn’t do anything that we didn’t expect them to do,” said quarterback Blake Barnett, who completed 13-of-30 passes for 109 yards and two intercpetions. “Props to them for doing what they do and doing it well. On our behalf, and I talked to the team about it, the team that played out there tonight is not the team that we are. There were a lot of mental errors, lack of execution, lack of effort and it stems from everybody, including myself.”

The defense, which the offense put in bad situations more than once, couldn’t stop Wisconsin’s balanced attack. Quarterback Jack Coan (19-26-199, 2 TDs) was very effective in a turnover-free performance.

“As the head coach, I thought I had them ready to play,” said Strong. “I guess I didn’t. We had drops on offense early and that kind of took the momentum out of us. It was almost like we lost confidence and when we lost confidence we were never able to get back on track.”

As far as his team’s character, Strong doesn’t feel that is an issue even with how poorly things finished last season.

“It will really be a character check for us in the next few weeks,” he said. “Even the way we were getting beat, it was never where players were pointing fingers. There was none of that.”

The Bulls travel to Atlanta to take on Georgia Tech next Saturday.

Bulls Notes
Strong said Ford “will be back the next game”…..The Bulls have lost their last three games, all on home turf, by a combined 125-30. The other two defeats were to UCF, 38-10, and Marshall, 38-20, in the Gasparilla Bowl…..McCloud made his collegiate debut by completing each of his three passes and totaling 39 yards….Receiver Bryce Miller made his USF debut. The Southeastern University (NAIA) transfer caught three passes for 16 yards…..Oklahoma State transfer and linebacker Patrick Macon had game highs with 15 tackles and four tackles for loss. He also forced a fumble, which was recovered by North Carolina transfer and corner K.J. Sails….Running backs Jordan Cronkrite and Trevon Sands combined for 11 yards on 11 carries. Cronkrite was the team’s leading receiver with 23 yards. 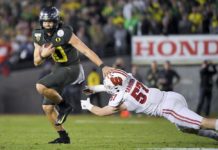