MEMPHIS, Tenn. (AP) — Brady White threw a pair of late touchdown passes to lift Memphis to a 34-33 win over South Florida on Saturday.

After Spencer Schrader kicked his fourth field goal of the game with about 4 1/2 minutes left to extend the Bulls’ lead to 33-20, White threw a 10-yard TD pass to Sean Dykes and then a 9-yard score to Calvin Austin III with just over a minute remaining to go ahead before the Bulls turned the ball over on downs. The final Memphis drives were both over 70 yards and took the Tigers (4-2, 3-2 American Athletic) a little over 2 1/2 minutes combined to complete.

White was 30 of 50 for 437 yards, four touchdowns and an interception. He has 81 career TD passes, tying Danny Wimprine (2001-04) for the Memphis record. Dykes had 147 yards receiving and two scores and Austin 102 yards and two TDs. Austin has over 100 receiving yards in four straight games, tying a school record.

USF scored 24 points in the second quarter in taking a 27-13 halftime lead with the teams combining for three touchdowns in just over 1 1/2 minutes at one point.

White threw a 5-yard TD pass to Dykes in the third quarter before Shrader kicked his third and fourth field goals to set up the dramatic drives by Memphis.

Noah Johnson threw for 217 yards and two touchdowns for USF (1-6, 0-5), which lost its sixth straight game. Daquan Evans had a 51-yard pick-six.

Because of COVID-19 restrictions, attendance was limited to 10,300 fans. 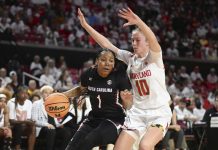 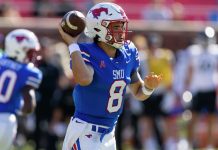 Another week another tough test as South Florida heads to Houston for noon game.