TAMPA – The curtain rose on spring practice at USF on Tuesday afternoon. For many it probably could not have come soon enough. After all, a six-game losing streak to conclude 2018 can only leave a bad taste.

Spring is a time for renewed optimism, though, and building toward a new season that is five months away. It is a time third-year coach Charlie Strong has very much been looking forward to.

Strong wants a more disciplined and accountable program in 2019. He felt that “little things” in both of those areas worked against his team even when it charged out to a 7-0 start, and certainly as the losses mounted.

“You have to hold guys accountable and it starts in the off-season,” he said. “It’s the little things and it’s why we ended the season the way we did last year just because we weren’t a very disciplined football team. Guy weren’t responsible. Not only the players, but the coaches weren’t, either.”

“I don’t ever like to fire coaches because you build relationships with those guys,” said Strong. “But we had to do something different. We also needed to do it for our players because at the end of the day you look at how are we going to make this team better and we have to make it better through our players. So, it was about what could we do differently.”

A player that could help greatly when it comes to making sure players are disciplined and focused on the details is quarterback Blake Barnett. The graduate transfer from Arizona State, who was banged up toward the end of last season and sat out three games, did not arrive at USF until summer. Yet, he found himself leading the offense after only a couple of months on campus.

Barnett, who said he is feeling great thanks in large part to hiring a nutritionist and adding 10 to 15 pounds to get up to near 225, enters spring drills with a full season at USF on his resume and therefore a higher level of comfort.

“Last year was kind of tough,” he said, when asked about his leadership role this time around. “Having a lot more familiarity with the guys on the team and with the coaching staff, I feel a lot more comfortable around here in that aspect.”

He is also looking forward to running the offense under Bell, the former Florida quarterback who led Valdosta State to the Division II national championship last season.

“It’s been really nice to get some of his coaching points and understand the offense that he has brought here,” he said. “I am looking forward to going on the field and seeing how he is out there. He’s very smart and this offense is going to be exciting.”

Barnett was not around for the exciting 2016 and 2017 seasons when the Bulls combined to go 21-4, including bowl wins over Power Five programs. Greg Reaves was a part of those teams. The senior defensive end would love nothing more than for the Bulls to reacquire the confidence and attitude that helped propel them to such heights.

Strong would like to have a few of his typically quiet seniors raise their voices a little. He mentioned defensive end Kirk Livingstone and offensive tackle Marcus Norman, two players whose work ethic and dedication to the program Strong has praised, to step up as far as being heard.

“You need those guys to step up when things are getting tough,” he said. “I told our seniors, ‘Listen, nobody can ever make you a leader. You have to decide if you want to go lead the team. Once you decide that, then we will be become a good football team.’”

One of the things that bothered Strong last season, something he brought up repeatedly during as the year progressed, was how his team needed to bulk up across the board. He said 90 percent of the rostered did just that this winter.

In addition to pointing out how Barnett beefed up, Strong noted linebacker Dwayne Boyles gained 25 pounds putting him at 235.

The Bulls, who return nine starters on offense and five on defense, held the first of their 14 practices Tuesday. The spring game will be Saturday, April 13 at Corbett Field at 1 p.m. 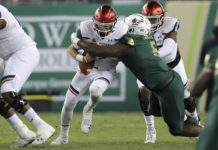