Due To Weekly Upsets Around College Football, No One Is Safe. It’s ‘Gut-Check’ Time In the Sunshine State

As college football teams start ‘the meat’ of their schedules, the storylines only get deeper heading into College Football Week Five. Can UCF get clinch a playoff berth? Will Miami’s change at quarterback change the temperature of the team? Are the Gators good enough to compete with Georgia in the SEC East? Can Florida State somehow salvage their season?

USF can’t seem to get any love, only receiving 50 votes this week. The list of teams getting more votes than the Bulls is head scratching: Colorado, Boise State, and Virginia Tech. The Bulls have a bye this week, so cracking the top 25 will have to wait until after week six.

UCF Tops our Florida Power Rankings for the fourth week in a row. Click here for full rankings.

The Knights keep rolling with their nation-leading 16 wins in a row. FAU made it fun for a half last week, but UCF put them away soundly in the second half. Due to Hurricane Florence, the Knights missed their chance to beat a Power Five team in UNC. Now, Pitt is the only Power Five squad on their schedule for 2018; Pitt lost to UNC last week.

UCF is a 13.5 point favorite at home as they welcome the Panthers to a rocking ‘Bounce House.” The Knights must sure up their defense, giving up 396.7 yards per game. The Panthers will have their hands full with a UCF offense that puts up 50 points, and 587.7 yards per game.

Pitt’s strength (rush offense) is UCF’s biggest weakness (run defense). If the Panthers want to keep it close, they’ll need to pound the rock and keep the Knights off the field. Look for UCF to load the box, and get after Pitt’s mediocre passing attack. The Knights will pull away in the second half as they did last week vs. FAU. 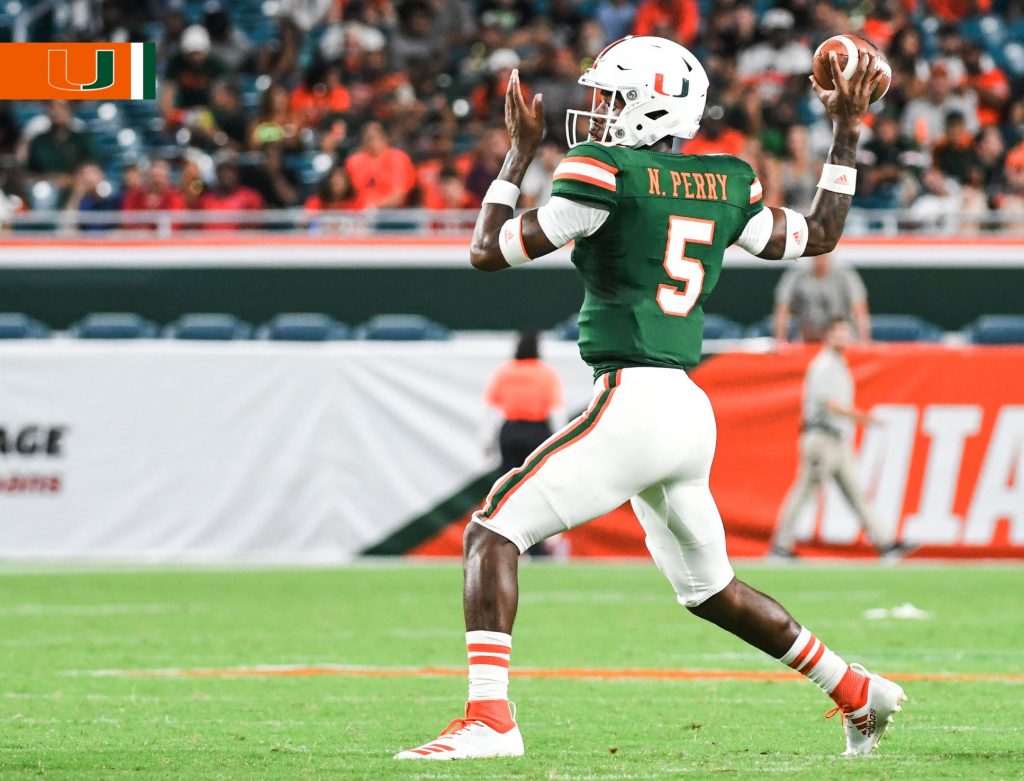 The Canes have a short week coming off 31-17 victory over FIU. Miami head coach Mark Richt made the inevitable quarterback change as he pulled Malik Rosier in favor of redshirt freshmen N’Kosi Perry after two disappointing series. In this week’s ACC teleconference, Richt wouldn’t divulge the starter for Thursday until the opening snap.

If Perry is the future, Richt must play him Thursday to adequately prepare him for next week’s matchup vs. Florida State. Whoever gets the nod, they’ll face a better than average pass defense that gives up just 194.3 yards per game. However, the Tar Heels give up 202.7 yards on the ground; which is where Miami will look to use their dynamic running back trio Travis Homer, D.J. Dallas, and Lorenzo Lingard.

No one likes playing on a short week. The Canes will use their seventh-ranked defense to stall UNC’s offense. Giving up just 78.8 yards on the ground, Miami will force the Tar Heels into passing situations in hopes of sacks, or bringing out the Turnover Chain.

Coming off a confidence-boosting win over SEC rival Tennessee, the celebration is short-lived as the Gators have a tough stretch over the next four weeks. Florida plays three top 25 teams in the next four weeks including #5 LSU next week, and #2 Georgia, Oct 27. But first, they travel to #23 Mississippi State Saturday.

Florida head coach, Dan Mullen, and his thumbprint will be all over this matchup as he faces his former team. To date, Florida’s quarterback Felepie Franks (742 YDS, 12 TD, 2 INT) has outplayed Miss St.’s quarterback Nick Fitzgerald (542 YDS, 4 TD, 2 INT). However, the Bulldogs seemingly have a better all-around team as they have the edge in pass offense, pass defense, run offense, run defense while giving up just 13.5 points per game.

Each team lost to upstart Kentucky, but the Gators scored more points (16) as Miss St. only managed 7. Look for the Bulldogs to exploit Florida’s run defense that gives up 187.8 yards per game. Miss St. yields just 269.3 yards per game on defense as Florida will struggle to move the ball on the road. However, Franks will be the X-Factor, he’s an entirely different player vs. last year.

The Seminoles and Cardinals come into week five with no wins vs. Power Five opponents. Saturday, one these programs will get that win in hopes of jumpstarting their perspective season.

Expect a lot of offense as the Noles, and the Cards give up more than 375 yards per game. Look for FSU to establish their run game with Louisville giving up 192 yards per game on the ground. The Cards won’t find much running room come Saturday and will look to expose FSU’s pass defense that gives up 279 yards per game.

Saturday is Florida State’s best chance to get a win going forward. The rest of FSU’s schedule is brutal, especially the next five games (#16 Miami, Wake Forest, #2 Clemson, NC State, and #8 Notre Dame). The Noles risk missing out on a bowl game (36-game bowl streak) if they lose to Louisville on Saturday.

The Owls want to put almost everything about last week’s loss to UCF in the rearview mirror, almost. FAU gave the Knights all they could handle in the first half. However, turnovers and the inability to stop quarterback McKenzie Milton resulted in a 56-36 loss.

This week the Owls travel to MTSU. The Blue Raiders’ 1-2 record is misleading as both losses came on the road, vs. SEC opponents. Saturday’s matchup is intriguing as FAU gives up 475 yards per game on defense, while MTSU puts up 355.3 yards per game on offense. However, the Owls have played two high-powered offense, and the Blue Raiders have faced two stout defenses.

Look for FAU to key on MTSU’s run game that only rushes for 117 yards per game, putting the Blue Raiders in obvious passing situations. This game will be early close, FAU will pull away late with the help of star running back, Devin Singletary.

After being ‘a cupcake’ last week, the Panthers get to face a cupcake in Arkansas Pine Bluff. FIU got housed last week down the road at Miami 31-17, bringing the season to a 2-2 start. The Lions won’t present much of a challenge if any.

The Panthers weren’t able to get the running game going vs. Miami last week. Look for FIU to focus on that going forward. 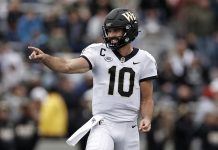