UCF moved up two spots to #16 in the AP Poll without playing a game; #21 Miami stayed the same after a 25-point win at Toledo. USF received 14 votes in the AP Poll; it’s only a matter of time before breach the top 25. 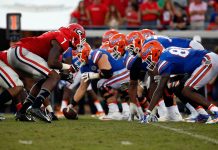