Its Hard To Watch Some Florida Programs in 2018, Week Ten Was No Different

College Football Week Ten was almost identical to week nine. The difference, UCF played as they cement themselves as the best team in the state of Florida.

The Knights had a wonderful week nine. It started with a shootout victory over Temple Thursday night. Then Memphis and Pitt won their matchups on Saturday, giving UCF three teams with a winning record on their schedule — they had none coming into week ten. It’ll be interesting to see where the CFP Committee ranks the Knights as their schedule has been a hot topic, and three teams ahead of them taking losses.

UCF trailed the Owls at halftime on Thursday night, as an upset was brewing. However, this is a team that has thrived in the third quarter all season. For the fifth time in eight games, UCF did not allow any points in that period. The Knights win streak now sits at 21 games.

“Down at halftime, the kids were calm and came out and kept playing,” UCF coach Josh Heupel said. “I told them at halftime champions love playing in environments like this, in situations like this.”

As great as McKenzie Milton, and running back Greg McCrae played, there are concerning questions about the defense; especially as the schedule gets tougher going forward. Temple set a program record for total offense (670 yards), outgaining UCF’s third-ranked offense. It was the type of performance that will not win anyone over, even though the Big 12 is notorious for those types of games.

Up Next: UCF welcomes Navy for Homecoming.

An average of 24.2 points decided the five meetings before Saturday between Missouri and Florida. It was hard to see this flop coming for Dan Mullen’s team, even after a disappointing performance last week against Georgia. The lack of offense called for the benching of quarterback Felepie Franks in favor of Kyle Trask. Trask looks to be the starter going forward.

“It’s a little bit of a reality check of where we are with the guys,” Mullen said, pointing to consecutive wins against Mississippi State and LSU. “If we come out and play really well as a team in all three phases, we’re good enough to play with anybody out there. If we don’t, we’re not.”

Hangover effect or not, this happened against Missouri, which got its first SEC win of the season at the Swamp behind a strong showing from QB Drew Lock. So much for the Gators’ manageable, four-game November path to a 10-win regular season. Their running game, which largely disappeared on Saturday, must find a spark.

Up Next: Florida continues a three-game home stretch against South Carolina. 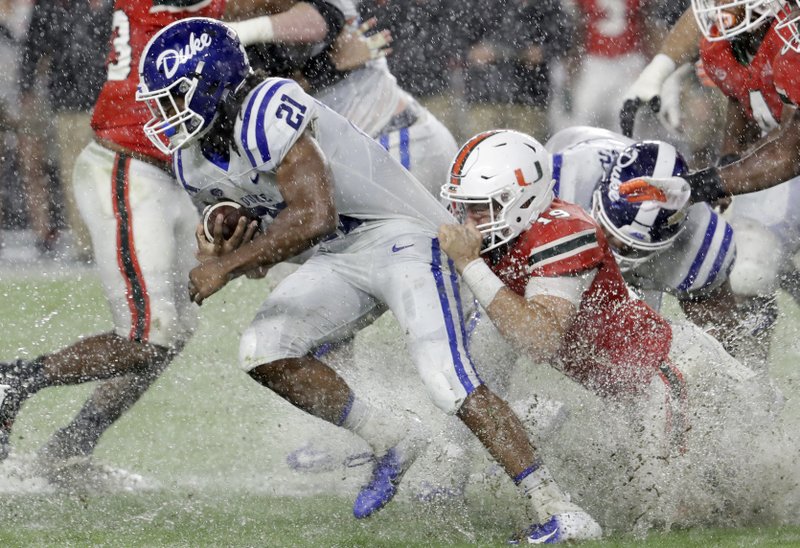 The Hurricanes had their first halftime lead in five games vs. the Blue Devils. However, Miami failed to score in the second half as they fell to Duke on Homecoming night. Miami has no offensive identity, no solution at quarterback, and haven’t scored over 20 points in their last three outings.

“It’s becoming too common to congratulate the opponent first, but I’ll do that,” Miami head coach Mark Richt said. “I’m asking our guys to be men of integrity and I’m going to try to do the same, at this point. Duke did a very good job…I don’t have a lot of really good answers, right this minute. I’m sure you all have a bunch of questions. It’s just heartbreaking to not be able to get the victory. We put a lot into it and didn’t get it done.”

Perry appeared to throw a touchdown to Cager, but the redshirt junior committed an offensive pass interference, and Miami was backed up to the Duke 28-yard line with 10 seconds left to play. Two passes to the end zone fell incomplete, and the Blue Devils’ upset victory over Miami was complete. Miami must not find a way to win one of their next three games to get bowl eligible.

Up Next: Miami travels to Georgia Tech.

USF dropped consecutive conference games for the first time since the end of the 2014 season with a 41-15 setback against Tulane on Saturday at Raymond James Stadium. Tulane took control of the game with 34 straight points after USF started with a 3-0 lead. The Bulls’ nation-leading streak of consecutive 20-plus point games is snapped at 38.

“For us to come out and play the way we played, it’s on the coaches,” Bulls head coach Charlie Strong said. “I told our players that (in practice Thursday). I saw it coming. … Even today, during pregame warmup I said I know we’re not ready to play, we’re not focused.”

Up Next: The Bulls travel to 8-1 Cincinnati.

A dominant second-half performance was the difference as the Florida Atlantic University football team defeated FIU 49-14 in Shula Bowl 17 on Saturday. The Owls improved their Shula Bowl record to 12-4 with the win, but it marks their first victory at FIU since 2009. FAU is 4-5 overall and 2-3 in Conference USA play for the season. The win is also the 50th of Lane Kiffin’s career as a collegiate head coach.

“It was a really good win. That’s how we ended the season last year, taking care of the ball, playing good defense and running the ball really well. It was good to see, especially in the second half, to end on a 35-0 run on the road against an undefeated (in conference) team” said Kiffin.

FIU couldn’t overcome a slow start on Saturday night at Riccardo Silva Stadium. Due to the loss, FIU drops to 6-3 overall and 4-1 in C-USA play, while FAU improves to 4-5 and 2-3 on the year.

Up next: FAU will host Western Kentucky for Homecoming. FIU travels to UTSA. 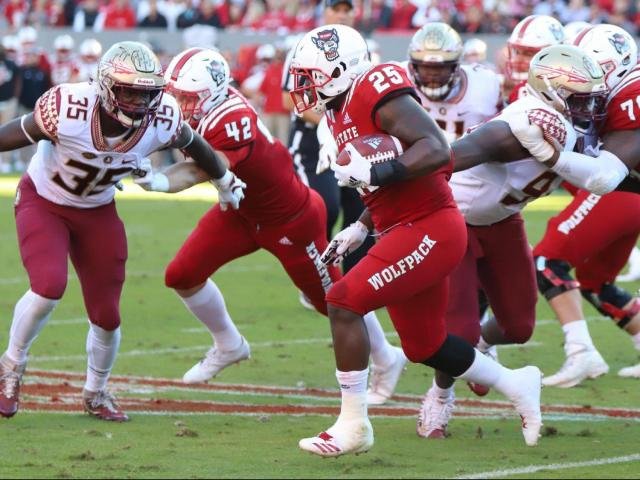 A new starting quarterback and a new play-caller gave Florida State’s offense a welcome and noticeable boost. Neither were enough to overcome North Carolina State’s, Ryan Finley.
A fifth-year senior and perhaps the most NFL-ready quarterback prospect in the ACC. Finley threw for 240 yards and three touchdowns as NC State raced out to a quick lead and held off a brief FSU rally for a 47-28 victory at Carter-Finley Stadium.

“We’ve got to learn to translate our effort and the way we work the sidelines to the football field,” first-year FSU coach Willie Taggart said. “That’s something we didn’t do.”

Things couldn’t have been worse in last week’s 59-10 home loss to No. 2 Clemson, a performance that had Taggart openly questioning his team’s effort and whether some players quit. The Seminoles didn’t play anywhere near well enough to win this one, either, including 16 penalties for 121 yards to continue their trend of being among the nation’s most frequently flagged teams.

Up Next: The Noles travel to No. 3 Notre Dame. 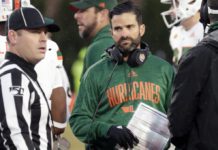