Texas and Oklahoma are looking for a better deal.

Two institutes of higher education, the University of Texas and the University of Oklahoma are apparently ready to leave college sports’ Big 12 Conference and move their athletic programs to the Southeastern Conference in a money move. The possible shift of the two schools could be complicated or hastened by television. ESPN or FOX could make the move happen or block it. The Big 12 will also want money from the two schools should they choose to leave now. There could be opposition from SEC members Texas A&M and Missouri. 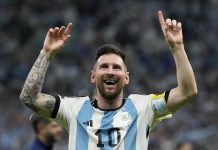