It is true, if you listen to college football insiders that college football is under siege. But the Jerry Sandusky/Penn State episode seems to have been forgotten. Penalties against the school have been eased but NCAA head Mark Emmert’s 2012 performance announcing the Penn State sanctions were and remain laughable.“Football will never again be placed ahead of educating,” said the guy running the cartel known as the NC double A or the NJC2A. While Emmert was uttering his remarks, other big time college football programs were laying low until they got clearance to raid the Penn State football team. Penn State is back as a football power. Football is the top priority, not education. Congress is fine with that.

Congress could strip the NCAA of a tax exemption. For instance, football teams and the conferences which house those teams going to bowl games could be forced to pay tax on proceeds from bowl games. Then Congress could strip the NCAA from the 1961 Sports Broadcast Act and its amendments which allows sports leagues and the so-called the governing body of amateur college sports the National Collegiate Athletic Association to sell their product, college sports games, as one to a television network or networks or the conferences to sell the conference product as one to various multi systems operators in cable or satellite TV such as the Big 10 network or the SEC. Even when the athletes seek federal help, such as the Northwestern football players who wanted to unionize, the National Labor Relations Board said no and actually cited the balance of college power as a reason. College sports is all about money except for the players who get nothing. 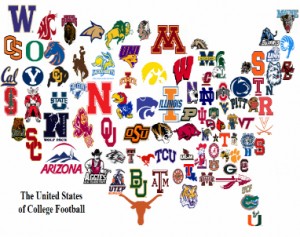