TAMPA — The feeling was as empty as the stadium.

True, using one or both of the timeouts probably would not have made a difference in Thursday night’s 17-7 loss to Temple at Raymond James Stadium. But it ensured what remained of the maybe 10,000 who showed up (announced 26,214) would go home with an empty feeling.

With 2:06 on the clock and trailing by 10, USF started at its own nine yard line after the Owls, instead of attempting a short field goal and risk disaster, went for it on fourth down and came up short.

What followed was a noticeable lack of urgency as the clock ticked down. In fact, if not for quarterback Jordan McCloud dropping back to pass, one might have thought the Bulls had the 10-point lead and were content with letting time expire. The lack of urgency was that apparent.

“That didn’t have anything to do with it,” said coach Charlie Strong, when asked why he did not call a timeout on his team’s final series despite having two at his disposal. “We were down 10. Just move the ball.”

Other than an impressive 90-yard touchdown drive late in the third quarter that made the score 14-7, the Bulls failed to move the ball much against the Owls. In fact, that 90-yard drive represented nearly one-third of USF’s 286 yards on the evening. (And to think the Owls were without hard-hitting safety Benny Walls and lost linebacker and third-leading tackler Chapelle Russell, who was ejected for targeting in the first quarter.)

When asked if it was frustrating for the defense to watch the offense sputter time and again, linebacker Patrick Macon was being a good teammate when he said, “We have to continue to give them as many chances as they need. Eventually, it will open up.”

The senior transfer from Oklahoma State went on to compare the offense to a bird hatching.

“It cracks its shell and it’s just taking time to open up,” he said. “When it opens up, it is going to be explosive.”

The problem is that there are only three games remaining and the Bulls (4-5/2-3 AAC) need to win two of them to become bowl eligible. The remaining opponents are CFP No. 20 Cincinnati at home, No. 21 Memphis at home and 7-2 UCF in Orlando.

Macon, who had a game-high nine tackles and has had a superb season, and the defense did their part.

The Bulls limited the Owls to 320 yards, but because the offense consistently struggled with McCloud sacked nine times, every big play allowed or mistake made was magnified.

A couple of missed tackles allowed Temple’s Jager Gardner to rip off a 57-yard run, by far the game’s longest offensive play, to set up a touchdown that broke a scoreless tie with 1:29 remaining in the half.

Temple scored its second touchdown when Terrence Horne, after catching a screen from McCloud, was stripped by corner Christian Braswell. Linebacker Sam Franklin scooped up the loose ball and raced 39 yards for a 14-0 Temple advantage with 4:45 left in the third quarter.

With the score 17-7 midway through the fourth quarter, the USF defense forced a three-and-out only to have Brock Nichols flagged for roughing punter Adam Barry. That allowed Temple to maintain possession and melt a total of seven minutes off the clock before turning the ball over on downs for that last couple of white flag-waving minutes.

“What happens when you play a good football team is that every mistake costs, and they cost us,” said Strong. “There was a big run of 57 yards and then they score. There is a fumble recovery and they pick it up and score. Then we try to make something happen (on special teams) and we end up roughing the punter.”

From an offensive standpoint, Thursday night was a far cry from the Bulls’ last outing at ECU when they piled up 347 yards on the ground among a total output of 525.

While McCloud (23-of-38 for, 225 yards buoyed by a couple of shovel passes that went for nice gains) was sacked nine times, Jordan Cronkrite was the leading rusher with all of 21 yards.

“The plays are there and we have to make them,” said McCloud. “We know we have to win (two of the next three) to get to a bowl game. That’s our mindset right now. We have to do it for the seniors, mostly.”

While the redshirt freshman is saying the right things, the Bulls likely squandered their best chance to win again in 2019. 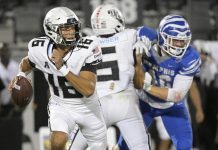 UCF wants to keep things moving forward as they face a Temple is looking to get back in the win column. 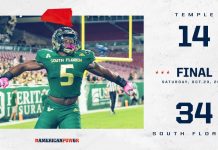 South Florida needs a win tonight when they host Temple as the Bulls look to start a winning streak. 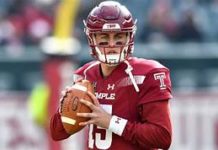 Temple’s Russo throws for 4 TDs, USF offense gets rolling but the Owls win 39-37