The President of the National Collegiate Athletic Association has some concerns at the start of the 2017-2018 college basketball season. Dr. Mark Emmert reacted to a poll that does not paint college basketball or NCAA member schools in a favorable light following the arrests of 10 people in the college basketball industry on various corruption charges in an ongoing investigation. Yet it is hard to believe the NCAA president’s sincerity based on his comments following the sentencing of Jerry Sandusky on pedophilia charges and Penn State’s failure to do anything to stop Sandusky. In 2012, Dr. Emmert, said,  “Football will never again be placed ahead of education,”  While the NCAA boss was uttering his remarks, other big time college football programs were laying low until they got clearance to raid the Penn State football team. As the words come out of Dr. Emmert’s mouth other college football programs started to pick apart the Penn State football carcass taking players. All of the NCAA sanctions eventually were removed from Penn State.

The findings showed 79 percent of people polled believe big schools put money ahead of student-athletes, 69 percent considered those universities more of a problem than the solution and 51 percent said the NCAA is part of the problem. Dr. Emmert’s organization has decided to take action, an NCAA commission chaired by Condoleezza Rice will study college basketball. The group will make recommendations by April. “We cannot go to the next basketball season without seeing fundamental change in the way college basketball is operated. The public doesn’t have sufficient confidence in any of us in terms of our ability to resolve these issues.” Dr. Emmert mandate is to reverse the NCAA’s decades long history of having a rotten record. 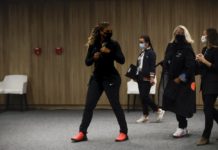