Rock takes a look at all the Florida college football games this weekend. Canes, Gators, Noles, and Bulls are all in action! Four of the last five Bulls games have been decided by one possession. Do you believe this will be the toughest test thus far for USF?

What’s the latest from One Buc place? Rock brings you inside the locker room. Can Kendal Beckwith get healthy in time to fill the void at linebacker for the Bucs matchup against the Bengals this Sunday?

Rock delves into the Tampa Bay Lightning’s victory late last night. Nikita Kutcherov’s 150th career goal would prove to be the only one of the contest as Tampa defeated Colorado on the road, 1-0, pushing them to 6-1-1 on the season. They take on the NHL’s newest franchise, the Vegas Golden Knights, at 6 pm ET tomorrow night.

Rock recaps game 2 of the World Series at Fenway Park. David Price continues to pitch well enough for the Red Sox to continue their winning ways, as they claimed a 2-0 series lead the after last nights 4-2 win. With the series shifting to Los Angeles, Will the Sox keep up their winning ways and sweep the Dodgers in this year’s Fall Classic?

Tom Layberger, SportsTalkFlorida.com – All the college football action this weekend! 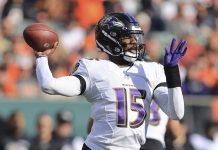