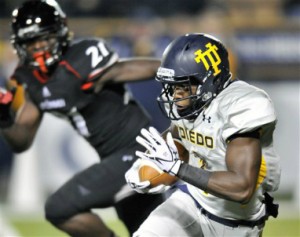 First things first: The professional opinion here is that Toledo senior All-MAC wide receiver Bernard Reedy was not “talking trash” or providing “bulletin-board material” in his assessment of Florida ahead of his Rockets’ Week 1 trip to Gainesville. Like any college football player before the first week of the season, Reedy is confident, and the motivation behind his remarks was almost certainly simply to explain that confidence.

That said: There’s no doubt those remarks are going to cause more than a few raised eyebrows among the Gators and Gator faithful. Because whatever Reedy’s intent, you can’t sound like you’re knocking another team’s effort and/or conditioning and have those comments go unnoticed. And that’s exactly what it sounds like Reedy’s doing.

“Since I’ve been watching film on them, I’ve seen that late in the game … they still don’t go as hard as they do in the first and second quarters,” Reedy told reporters. “So I feel like if we can just keep pressure on them the whole game, we could eventually wear them down.”

For more on this story visit: CBS Sports