TALLAHASSEE, Fla. (AP) — Many things have changed for third-ranked Florida State since Derwin James last played in a game. What hasn’t changed is the sophomore safety’s ability.

James missed most of last season with a knee injury and now has a chip on his shoulder. He is still considered not only the team’s best defender, but one of the best in the nation. He’ll get a chance to prove it when the No. 3 Seminoles take on top-ranked Alabama Saturday in Atlanta. 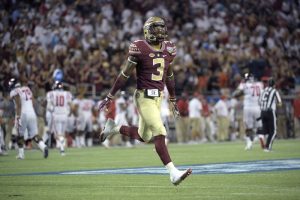 James took part in spring practices after tearing the meniscus in his left knee last September during the second half against Charleston Southern. The 6-foot-3, 211 pound Haines City, Florida native said he hasn’t had any problems with the knee.

The only problem James has had is keeping his emotions in check.

“I’m anxious to get out there for the first game I still feel like I have something to prove,” he said.

James played in only two games last season, but had an impact in both. He had eight tackles and an interception in the win over Ole Miss . After he was sidelined, the Seminoles dropped two of their next three games and were ranked last among Power Five conference teams in pass defense.

The defense improved during the second half of last season and comes into this year with plenty of experience. Florida State was the only school to have two players on The Associated Press Preseason All-America first team defense: James and cornerback Tarvarus McFadden.

Alabama coach Nick Saban said that James is every bit as good as anyone they have faced in his 11 years at the school.

“This guy’s just a very aggressive player. He’s got good ball skills. He’s a good tackler. Good blitzer. Just all around a really, really good football player,” Saban said. “I think when you have good safeties, they can minimize the big plays that you ever give up because a lot of times they’re ready to stop the ball when it breaks the line of scrimmage. He’s certainly good at doing that.”

James said his biggest takeaway from spending last year on the sidelines was getting a better understanding of the game. Now, he believes he can watch film from a coaches’ standpoint and has a better grasp on his — and other players’ — responsibilities.

“When the coach is getting on you it’s because of a reason. It’s because of something that you see, that they see,” he said. “I didn’t get that at first coming in, but now I understand why the coaches are on me so hard.”

Despite limited action last year, James comes into the season hailed as the best defensive player in college football by a couple of national publications. James is expected to be even better than he was as in 2015 when he started eight games as a freshman and was second on the team in tackles with 91, including 9.5 for loss and 4.5 sacks.

James has drawn comparisons to former Michigan standout Jabrill Peppers because of his versatility. Besides lining up at safety, James has played end in certain pass-rushing situations. He also occasionally is used as a linebacker or a corner against a slot receiver.

Besides playing defense, James is expected to see time at punt returner and could even see a couple plays on offense at receiver.

But he’ll likely be needed to make his biggest impact vs. the Crimson Tide on defense.

Florida State has struggled against dual-threat quarterbacks the past couple seasons, but James thinks his return and that the unit has a better understanding of the scheme should help against Alabama and Jalen Hurts.

Last season Hurts accounted for 3,734 yards of total offense and 36 touchdowns. He also had one game where he threw for over 300 yards and rushed for over 100.

Hurts said FSU’s defense reminds him a lot of Alabama’s.

“They’re fast, physical, a lot of range, tall. We’re up for a challenge,” Hurts said. “It is going to come down to who executes the best.”

Despite the fanfare this opener is receiving — it is the first-ever opening week matchup of preseason top-3 teams since the AP started selecting them in 1950 — James is trying to focus on the entire season and trying to get the Seminoles back to the College Football Playoff for the first time since 2014.

“It’s great to have those things, but I feel like I haven’t reached my full potential yet,” James said. “I’m just trying to make a name for myself. I want to live off my own legacy. I don’t mind being compared to somebody but I really want to create my own legacy so that one day kids can say, ‘I want to be like Derwin James.’” 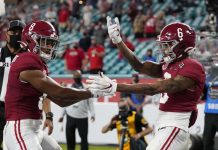