Florida State Pulls Away in the Forth Quarter

The Florida State Seminoles beat the Florida Gators 31-13 to get their forth straight win verses the Gators for the first time since the four games from 1987-1990.

The Seminoles (9-3) played great on both sides of the ball, with running back Dalvin Cook running for 152 yards and touchdown in what could be his last game in a Seminole uniform.  The junior running back hasn’t announced that he his going to the NFL next year, but it is assumed by many that he will. 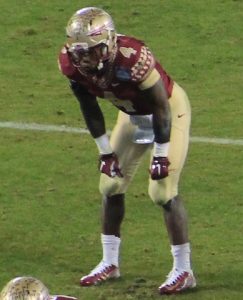 The Seminole defense shined in the victory, not allowing the Gators to convert on a single third down.  The Gators went 0-12 on third down for the evening.  The ‘Noles defense allowed just 207 yards from the Gator offense. 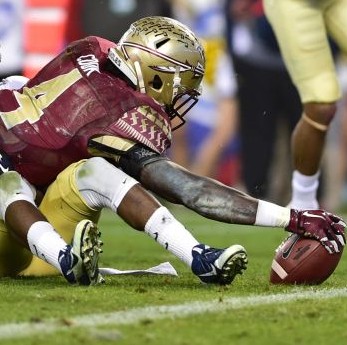 The Gators got the ball to start the game and marched down to the FSU 2-yard line only to go for it on 4th down and turn the ball over after an incompletion.  Florida State looked to capitalize after the defensive stop with some success on offense.  They got into Florida territory, but kicker Ricky Aguayo didn’t have enough power to make the 49-yard field goal.

With both teams unable to score on each one of their first drives, the Gators looked to get on the board first, but quarterback Austin Appleby fumbled the ball while being sacked and the Seminoles recovered.  Cook ran the ball into the end zone from 17 yards out two plays later to put the ‘Noles up 7-0.

After a Florida punt, the Seminoles drove the ball to the Florida 5-yard line, but had to settle for a field goal.  The Gators responded with a 16-play, 54-yard drive that ended with a 38-yard field goal by Eddy Pineiro.  Florida State had just over two minutes to score before halftime, but Aguayo had a 44-yard field goal blocked.  The Seminoles went into the half with a 10-3 over the Gators.

Both teams weren’t able to score on their first drives after halftime.  On the Gators second drive after halftime, the Gators got a 41-yard field goal from Pineiro to pull with four points of the Seminoles.  The ‘Noles responded on their next drive when quarterback Deondre Francois found Travis Rudolph on 3rd&10 with a 46-yard catch and run touchdown.

After another Gator punt, the Seminoles got another 3rd down touchdown.  Fullback Freddie Stevenson ran up the middle on 3rd&1 for a 27-yard touchdown.  The Gators were forced to punt again on the following drive, but this time the Gators recovered a fumble by the punt returner and ran it back for their first touchdown of the game, but were still behind 24-13.

There were many cases when the Gators seemed to be gaining momentum and the Seminoles found ways to take it away instantly.  With just over 4:25 left in the game, Francois ran upfield and was hit hard, forcing him to fumble with the Gators recovering.  On the first offensive play following the fumble, Seminole defensive end DeMarcus Walker for a loss of 12 yards.  Two plays later, Appleby fumbled when he was hit by Derrick Nnadi with Walker recovering the fumble.  Florida State put the nail in the coffin when Francois scored four plays later with a 8-yard touchdown run to put the ‘Noles up 31-13 with just over a minute to play and the eventual final score.

Florida State will have to wait and see who they will play in their bowl game.  The Gators go on to play number one ranked Alabama in the SEC Championship game next weekend.