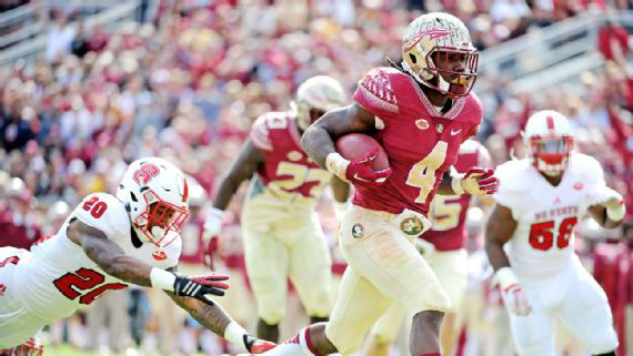 It was a beautiful day in Tallahassee for homecoming. The weather was cool, the sun was shining, and the Florida State (8-2, 6-2 ACC) offense was struggling as the NC State Wolfpack came into town.

After a dreary first quarter in which the ‘Noles only put up 7 points to the Wolfpack’s 17, it seemed  the Pack had the Seminoles’ number once again or the loss to Clemson still lingered. However, with a quick change at quarterback and a resurgence on the defensive side of the ball, Florida State rallied back to defeat the Wolfpack, 34-17.

Everett Golson got the start but Sean Maguire was the one who finished the game.

Golson started out slow and after committing three turnovers in the first five drives of the game the decision was made for Maguire to go in and replace him. After going only 5 of 9 for 52 yards (his lowest attempt number since being pulled in 2012 against Michigan), Golson was pulled. It also didn’t help that he fumbled on the first play of the game and threw 2 interceptions.

Maguire on the other hand, performed admirably. He showed more improvement from his last start against Clemson. He went 18 of 28 for 231 yards, two touchdowns and one interception. Maguire also lead Florida State to four straight scoring drives through the second and third quarters and the Florida State offense finished with 479 total offensive yards.

Dalvin Cook solidified his legacy by breaking former Florida State running back, Warrick Dunn’s single season rushing record. Dunn rushed for 1,242 yards at the end of the 1995 season. Dalvin Cook broke that 20 year old record today with 22 carries for 138 yards today. Cook has now rushed for 1,369 yards this season. Cook has stated that this wasn’t a goal of his when he came to Florida State, but he is ecstatic nonetheless. Dunn and Bobby Bowden were both present at today’s game.

But it wasn’t all positive for FSU as there is room for improvement. The offensive line struggled as numerous false start penalties plagued the ‘Noles offense. The line tightened up a bit after Maguire was in the game but not by much.

Wolfpack quarterback, Jacoby Brissett, was kept relatively in check by a Florida State defense that did not allow another score by NC state after the 1st quarter. Brissett finished the game 27 of 47 for 209 yards and one touchdown on the day. Brissett was also the leading rusher for NC State, rushing for 25 yards on 17 attempts.

Florida State has had a very up and down season, however that season is indeed coming to a close. Florida State will finish up their home schedule this Saturday, November 21st with Chattanooga. Kickoff will be at 3pm eastern.