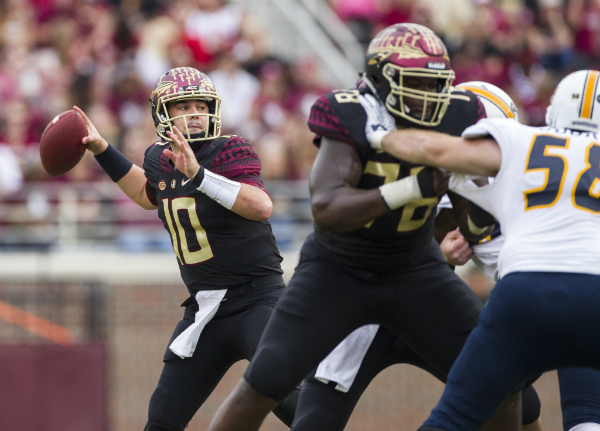 It was the last home game and senior day for the Florida State Seminoles (9-2, 6-2 ACC) as they took on the Chattanooga Mocs (8-3). Florida State was back in black for the first time since 2008 and the first time the new black uniforms have been worn since they were introduced last year. FSU had a bit of a slow start again in the first quarter, as Kermit Whitfield fumbled the opening kickoff. However, the garnet and gold (or rather, the black and gold) picked it up in the subsequent quarters to finish off the Mocs, 52-13.

Dalvin Cook had another exceptional day with his 15 carries for 106 yards (the seventh time he has passed 100 yards in a game this season) and two touchdowns. Cook has now extended his season rushing total to 1,475 yards with one game still remaining.

Jacques Patrick and a multitude of new faces also got in some quality minutes against Chattanooga as the game advanced into the late second half. Patrick helped carry the load for Cook with 16 carries for 77 yards and two touchdowns of his own. One of the new faces that the crowd must have been pleased to see was walk-on full back Colton Plante. Seeing as how regular fullback, Freddie Stevenson, was out due to a concussion, Plante took the opportunity to score his very first collegiate touchdown in the third quarter.

The Mocs were held relatively in check by the ‘Noles defense. After taking an early 3-0 lead (after the aforementioned Whitfield fumble), the Mocs only got close to scoring one more time with the regular starters in on defense. Jacob Huesman led Chattanooga in both passing and rushing. He accounted for 94 yards in the air, with one interception from senior Safety LaMarcus Brutus, and 21 yards on the ground with Chattanooga’s sole touchdown of the game, which came in the 4th quarter.

Sean Maguire had another solid outing for Florida State, going 12-17 for 152 yards and two touchdowns (both of which were to the redemption-minded Kermit Whitfield). Late in the game both JJ Cosentino and Everett Golson took turns running the offense with both having solid performances on their respective drives.

FSU will close out the regular season with a 7:30pm eastern game against UF, Saturday, November 28th. Coverage will be provided by ESPN.