FSU was hoping for redemption against Georgia Tech in its season opener on Saturday.  The two teams have not faced off since 2015, when the 9th ranked Seminoles were upset in a final play losing 22-16.

History repeated itself as Georgia Tech, led by freshman quarterback Jeff Sims, came back from a 10-0 deficit in the first half to beat Florida State 16-13.

In a game troubled with two weather delays, the loss was not without its silver lining. New Head Coach Mike Norvell debuted a strong defense and talented special teams.  FSU defensive back, Asante Samuel, Jr. had two interceptions, while senior tackle Marvin Wilson came up with two blocked field goals on special teams in the first half.

The Seminole offense, led by Quarterback James Blackman showed off in the first drive putting up 6 points after a touchdown pass to Keyshawn Helton.  Unfortunately, it was the one and only touchdown for Florida State.

The problems only continued into the second half. Coach Norvell’s Seminoles showed talent, but lacked in consistency.  The rest of the game was peppered with interceptions, three sacks, a fumble and a missed field goal.

The Seminoles also suffered an early critical injury in Defensive End Joshua Kaindoh who was hit on an illegal block. He left the game at the end of the second quarter with a knee injury.

This is certainly not the start Florida State fans had hoped for with the new program.  In post-game, Norvell admitted, “we struggled to sustain momentum, struggled to sustain, had some missed opportunities throughout the course of the game. It is definitely heartbreaking to come up short on that one.”

Looking forward, he added, “this football team does not have to be defined by tonight. They will be defined by how they respond to this situation and how we move forward there together as a program.”

The Noles have two weeks to sort it out. Florida State takes on the Miami Hurricanes on Saturday, September 26.

Seminole fans will have to wait patiently to see if Florida State can make the necessary adjustments to find their way to a win – and onto a warpath – in 2020. 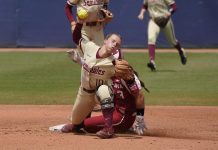 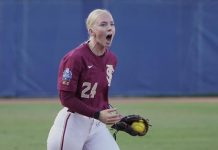 Harding leads Florida State past Oklahoma 8-4 in WCWS Game 1. The same two teams play tonight with FSU one win away from the... 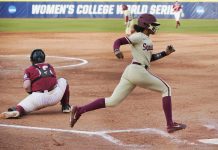 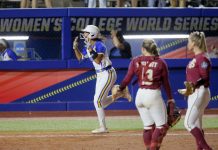