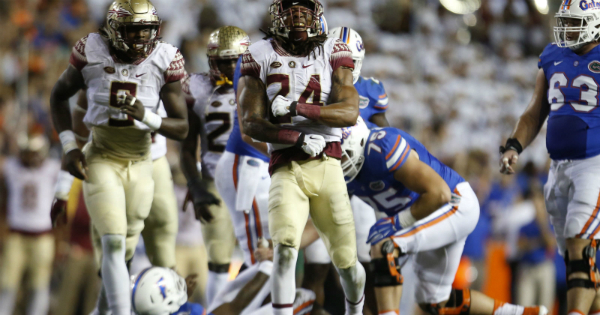 Capping off a wild and fun rivalry Saturday, the No. 13 Florida State Seminoles (10-2, 6-2 ACC) took a small trip to Gainesville to take on No. 12 and in-state rival, The University of Florida (10-2, 7-1 SEC). As rivalry games go, it wasn’t pretty, it wasn’t all clean, and it was chippy at times between the two Florida schools. What was most unexpected, was the final score. The Seminoles claimed the “state title” again after defeating the Gators by a final score of 27-2 to close out the regular season in front of the largest crowd UF has ever seen (90,916 attending)

Most rivalry games are expected to be ugly. It’s a huge game for both teams and they are both playing up to their competition. That being said, rivalry games shouldn’t be this ugly. The offense in the first half for the Seminoles was held completely in check by a talented (and surprisingly healthy) Gators defensive line. Dalvin Cook was held to well under 100 yards in the first half and Sean Maguire took a little while to get settled in as well.

Maguire finished the night 14 of 28 for 160 yards and 1 touchdown. While the numbers aren’t great and most came in the second half, it was enough to get the job done. Maguire’s sole touchdown pass was a doozy however. After being stopped on third and goal inside the five, Maguire rolled out to the right, decided not to use the green grass in front of him to step in to the end zone, and then threw back across his body to tight end Jeremy Kerr for his first collegiate touchdown and catch and the first touchdown for the Seminoles. Maguire was also under constant pressure during all night, including the one costly mistake in the 4th quarter in which Maguire was hit, fumbled the ball, and it was recovered in the endzone for a safety, resulting in the only points for the Gators all night.

Dalvin Cook had a slow start to the night as well but earned every yard he got as they did not come easy. In the first half, Cook was held and controlled by the talented UF defensive line and a lackluster performance for the FSU offensive line. However, by the end of the night Cook had amassed 183 yards on 26 carries for two touchdowns. Cook now has had over 100 yards in eight games of the 11 he has played in this year. 150 of those yards came in the fourth quarter alone as he tacked on two touchdowns late, to put it away for the Seminoles.

Lastly, let us call it what it is, the defense of FSU pitched a shutout. Had it not been for the errant safety late in the game, the Seminoles would have successfully shut out the Florida Gators for the very first time in their 60 total games played. The garnet and gold held the Gators in check, holding UF to zero points scored on offense and holding Kelvin Taylor to 136 yards on the ground and Treon Harris to 134 yards through the air. With only 262 total offensive yards for UF, the FSU defense forced the Gators to punt 9 times on the night. Derwin James and Terrance Smith both finished with 9 tackles each for the Seminoles, while DeMarcus Walker had 1.5 sacks and a blocked field goal (FSU’s first since 2010 at Clemson).

Florida State now improves to 5-1 against UF under Jimbo Fisher, with the only loss coming in 2012. The Seminoles also now hold a three game winning streak in Gainesville, which is the first time Florida State has ever completed that task.

The regular season is now over. As always, it goes by all too quickly for most fans. The Seminoles do not have an ACC championship game to look forward to, nor do they (barring a catastrophic collapse of the top 10) have a College Football Playoff appearance to look forward to, however, they do have a bowl game to look forward to. The bowl selection announcement will be made on Dec. 6th. It seems to be that the ‘Noles will end up in the Peach Bowl in Atlanta, pending a Clemson victory over North Carolina.