OMAHA, Neb. (AP) — Florida State converted three walks, two infield singles and a double into three runs to take the lead in the seventh inning, and the Seminoles knocked Cal State Fullerton out of the College World Series with a 6-4 win Monday.

Fullerton (39-24) has gone two games and out in four straight CWS appearances and has lost nine games in a row in Omaha.

The Seminoles (46-22) went ahead against three Fullerton pitchers, with the tying and go-ahead runs scoring on back-to-back walks by Blake Workman.

Chase Haney (3-2) worked two-third of an inning for the win, and Drew Carlton earned his seventh save after Fullerton put two runners on base with two outs in the bottom of the ninth. Pinch hitter Hank LoForte struck out looking to end the game.

It was another heart-wrenching loss for the Titans. They blew a 5-1 lead in the sixth inning against No. 1 national seed Oregon State on Saturday, and they failed to hold a 4-3 sixth-inning lead against the Seminoles.

The Titans had gone ahead in the bottom of the sixth on Dillon Persinger’s double and Timmy Richards’ two-run homer.

Florida State’s Taylor Walls reached on a tough play to shortstop leading off the seventh against Jack Pabich (1-3), and Dylan Busby doubled when left fielder Chris Prescott went back to catch the low fly, which dropped out of his glove when he ran into the fence.

Workman came on and intentionally walked Jackson Lueck, and then walked Quincy Nieporte and Cal Raleigh to give the Seminoles a one-run lead. The Seminoles made it 6-4 against Brett Conine when Richards couldn’t make a play on Matt Henderson’s grounder to short.

The game matched left-handed starters who had been sharp recently. Fullerton’s John Gavin, the San Francisco Giants’ eighth-ranked draft pick, had allowed two runs in his previous 27 1/3 innings. Drew Parrish, a freshman, had given up two runs over his last 23 innings.

Florida State took a 2-1 lead in the fourth on Steve Wells’ low sacrifice fly to center. Cal Raleigh tagged up at third, and catcher Chris Hudgins had to move to his right to bring in Scott Hurst’s throw. The sliding Raleigh was able to get his left hand onto the plate just ahead of Hudgins’ tag try. The call was upheld on video review.

Fullerton pitchers issued eight walks against the Seminoles and 13 in their two CWS games. The Titans came to Omaha ranked fourth in the country with 2.41 walks per nine innings.

The game marked the 1,000th CWS game since the event started 71 years ago. Mike Martin, in charge of a Florida State program that has never won a national title in 21 previous appearances, wisecracked when a reporter pointed out it was game No. 1,000: “I thought you were going to say, ‘Did you know if you lost, you’d be the losingest coach to ever play in this thing?”

The Seminoles play another elimination game Wednesday against LSU with a chance to avenge their opening game loss. 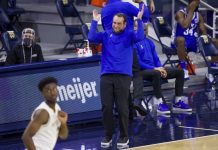