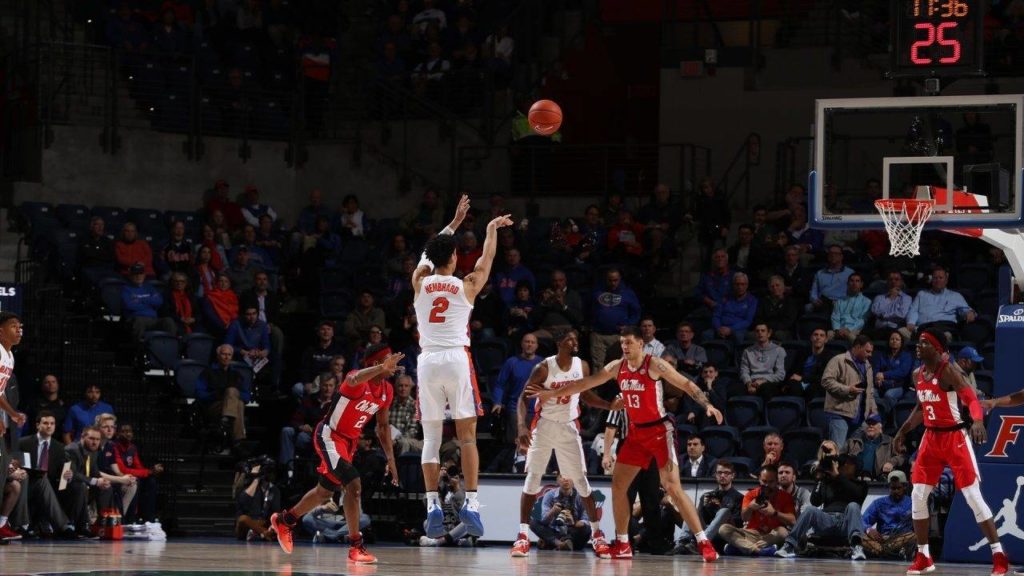 He even wanted the ball in crunch time.

Allen hit a 3-pointer to send the game into overtime and added two huge baskets in the extra frame to help Florida beat Mississippi 90-86 Wednesday night.

Allen finished with 21 points, none bigger than those three that came on a shot in front of Florida’s bench with 2.5 seconds to play in regulation. He made two driving layups in overtime and then made a diving save of a ball headed out of bounds in the final minute.

“Guys made some huge plays, led by KeVaughn down the stretch,” coach Mike White said. “Guys earned a W against a very good team.”

Allen’s night wasn’t perfect, though. He had a critical turnover in the final seconds of overtime that put the outcome in jeopardy.
Fortunately for the Gators (12-8, 4-3 SEC), Noah Locke made two free throws with 11.2 seconds left to seal the victory.

Locke finished with 22 points, Keyontae Johnson added a career-high 15 points before fouling out in overtime, and Andrew Nembhard chipped in 12 points and six assists.

Allen, Locke and Nembhard — Florida’s starting backcourt — scored the team’s final 26 points. The Gators shot 56 percent in the second half.

Terence Davis led Mississippi with 26 points, and Breein Tyree added 20. The Rebels (14-6, 4-3), who felt out of the Associated Press poll this week, have dropped four of five.

The Rebels might have been shocked to see the game get past regulation. Coach Kermit Davis considering fouling Florida with a three-point lead and 8.8 seconds on the clock, but he opted against it and will spend the next few days second-guessing his decision.

“Normally about 90 percent of the time we foul in that situation, which was almost nine seconds,” Davis said. “Still bad. We switched it off like we were supposed to, and he made a dead run and 3. … A lot of good things in the game. Florida made a couple of plays right at the end.”

Allen has been at his best this season in the last five games, including his top two performances in Florida’s past two home games.

“I am feeling more comfortable,” said Allen, a senior and one of the quieter players on the team. He said he heard assistant coach Jordan Mincey’s voice running through his head late, telling him to make “winning plays.”

Davis and Tyree looked like they would carry Ole Miss to victory in regulation. Davis scored on a spinning, baseline drive that put the Rebels up 72-71 with 1:23 to play, and Tyree followed with both ends of a one-and-one with 8.8 seconds remaining.

But Allen gave the Gators life on the other end and a big lift in the final period.

“He makes those types of shots all the time,” Locke said. “I thought it was going in. I know him. He practices those all the time, shot clock going down and he makes one of those. I wasn’t surprised it went in.

Mississippi: The Rebels fell to 2-5 when trailing at halftime. This one was a shocker considering they did just about everything right in the second half, making 16 of 27 shots (59.3 percent) and hitting all 10 free throws. But KJ Buffen’s extended arm wasn’t enough to affect Allen’s 3-pointer near the end of regulation.

Florida: After sitting out five of the past six games, forward Isaiah Stokes played eight minutes and gave the Gators some much-needed help in the paint. He finished with two points, but his layup ignited a 7-0 run in the second half. It was hardly a game-changing performance but exactly what Florida needed after losing big men Keith Stone (knee), Gorjok Gak (knee) and Chase Johnson (transfer).

Florida begins a brutal stretch, hosting No. 7 Kentucky, which has won seven straight, on Saturday. After that, the Gators play road games against Auburn and top-ranked Tennessee.