The Gators who joined the University of Southern California, LSU, and other big-name programs are looking for a new head coach. But if Florida wants instant results then there are only three men that should be on their list Ole Miss HC Lane Kiffin, Oregon HC  Mario Cristobal, and Baylor HC Dave Aranda.

Multiple reports have the Gators offering their next head coach a six-year 100 million dollar deal which is going to be hard to beat by any school wanting to keep their coach.

The University of Florida fired head football coach Dan Mullen just 11 months after pushing Alabama to the brink in the 2020 SEC Championship Game. This season Florida is 5-6 and it seemed that nothing Mullen did go right so Athletic Director Scott Stricklin, the man who hired him at Missippi State and then brought him to lead the Gators.

But despite a nearly 70 percent winning record over three years in Gainsville and before the start of the season he was rewarded with a three-year 12 million contract extension. But Stricklin is now looking for his replacement and he knows that he can’t miss on who he chooses to replace Mullen.

“This is a place that should be able to have a high level of sustained success over a consistent period of time,” Stricklin said. “To do that, you have to have a lot of little things in place. People look at losses as a cause to get rid of a coach. But a lot of times the losses or things that don’t go right on the field, are symptoms of other issues. I’m not going to get into all that because I don’t think that’s fair to everyone involved. But it’s a lot of little things you have to pay attention to.”

Kiffin is in his second year at Ole Miss and has the Rebels in the top 15 in the nation and he is not only a great young coach but also is a super recruiter. True Kiffin had head coaching stops at Tennessee, USC, along with FAU but it is his time as the offensive coordinator under Nick Sabin at Alabama that has returned him as a very hot candidate.

Kiffin at Florida would be like the return of Steve Spurrier who was cocky, had a swagger, and led the Gators to decades of success and a National Championship. Kiffin has that swagger and is just as cocky as the Head Ball Coach plus he is a must-follow on Twitter.

Aranda at Baylor has rebuilt a program from the ashes and is that same combination of an outstanding game coach along with his ability to recruit in Texas against the Longhorns, the Aggies, and all the other Lone Star State programs. The Bears are on track to win the Big 12 title and are just like Kiffin he has put his team in place to be a top 15 program.

Both Aranda and Kiffin have done great things without the assets that the University of Florida has and either man would be able to build a quality program and sustain it.

Lastly, we have Cristobal who has had Oregon in the top four teams in the CFP Playoff rankings until they lost last week to Utah. He like Kiffin is was part of the Sabin, Alabama coaching tree serving for four seasons as the assistant head coach and offensive coordinator.

Also of note is that Cristobal played for Jimmy Johnson and Dennis Erickson at the University of Miami plus he also was the head coach of FIU. He not only recruited Florida for Alabama but also now at Oregon, plus Cristobal has attracted more stars from Southern California than either USC or UCLA.

So, the Gators need to act fast and any one of these three men would be a great hire. We know that former Gators defensive coordinator and Oklahoma HC Bob Stoops, his brother Mark who is at Kentucky, Luke Fickell at Cincinnati, Billy Napier at Lousiana, plus Matt Campbell the head coach at Iowa State plus plenty more names.

But the Gators are focused on Kiffin, Aranda, and of course, Cristobal and any one of those three men are likely to be the next Florida head coach. Knowing Stricklin he will likely push for Cristobal because of the success at Oregon and his ties to the Sunshine State, Kiffin and Aranda are likely the two fallback names.

Florida will get their man and it is likely to be in early December. 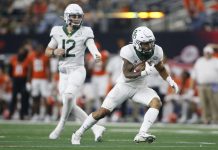 Sugar Bowl: No. 6 Baylor vs. No. 8 Ole Miss flying under the radar in what should be a fun game in “The Big...