Players may risk their health to play.

It is Selection Sunday where the learned people of college basketball figure out who are the best basketball teams in the country, slot them and send them off to apparently COVID-19 free Indianapolis in a tournament that brings hundreds of millions of dollars from television into the college basketball industry. One team probably won’t be considered for one of the Indianapolis spots. Duke University because someone in the school’s basketball program tested positive for COVID-19 and Duke had to pull out of the Atlantic Coast Conference tournament.  Duke University might not have made it to Indianapolis anyway. The team’s record was not very good. The tournament is back after being canceled by the COVID-19 outbreak in the United States a year ago. That’s good news for the people who run the college basketball and college sports industry. The money faucet has been turned on which means almost everyone sees money.

So, the student-athletes must be getting a big pay day for providing entertainment for people and playing for a title? They aren’t. The coaches are getting big paychecks and television is handing out big money to the NCAA. The athletes get nothing but a college scholarship. The television partners will do some profiles on some athletes but the coaches are the stars of the TV show even though they don’t play, and really have very little control of the game. There is some sort of justification that the players are getting a free education, that is partially true, but they are not getting everything paid and they are on a year-to-year contract. The term “student-athlete” is a cover to get out of paying and providing health care for the talent. Everyone makes money off the basketball tournament except the stars of the show, the players. It is madness. 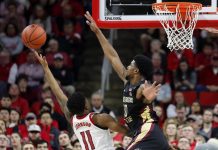