The Florida Atlantic Owls will travel to Norman, Oklahoma in week one of the college football season. FAU head coach Lane Kiffin will try to lead the Owls to victory as 21-point underdogs. However, a win would be the most important win for Kiffin’s future endeavors.

Fired over the phone by Al Davis in Oakland, leaving Tennessee high and dry for USC, then fired by USC on an airport tarmac, and being relieved of his play-calling duties by Nick Saban for a National Championship game are all black marks on Kiffin’s career.

The stints as a head coach aren’t helping either; less than two years with Oakland, one year with the Vols, and fired in the first month of his fourth year at USC.

Through all the smoke and fire, Kiffin has resurged, making a comeback in the college football coaching world.

It started in Alabama when Saban took a flyer on Kiffin, making him the offensive coordinator in 2015. That year Alabama played the most difficult schedule of any national championship team in college football history. Of the 15 teams the Tide played, 14 had a winning record, 13 played in bowl games, and Alabama defeated 12 of them, 8 won bowl their games, and 6 won 10 or more games. Bama capped off the season with a win over Clemson in the National Championship game and a Heisman Trophy winner in Derrick Henry.

In 2016, Kiffin convinced Saban to change his offensive philosophy. The Tide moved from a pro-style offense to a spread offense featuring a running quarterback, Jalen Hurts. The National Championship Game vs. Clemson was peculiar. After accepting the FAU job, Saban elected to go with Steve Sarkisian to call the plays. Sark hadn’t called plays all in over two years after being fired by USC. The Tide lost 35-31 to the Clemson Tigers. No one seems to know what really happened.

Kiffin took the FAU job in full stride as he became Mr. Twitter of college football. It seemingly backfired in the first four games of the 2017 season. The Owls were 1-3, and Kiffin looked like the wrong guy for the job. However, FAU got on track winning their last ten games by an average of 24.5 points. Lane Kiffin knows offense.

Flash forward to 2018, no one believes Kiffin will spend the next 10 years in Boca Raton. Most believe he’ll take another Power Five job in the near future. The future is now, as Kiffin has a prime opportunity to show the college football world that he is a big-time coach.

The Owls travel to Norman taking on the #7 ranked Oklahoma Sooners. It doesn’t get anymore blueblood in college football than Oklahoma. If can Kiffin call pull the upset or make it one possession game, it’ll put all hot seat coaches on notice.

It won’t be easy as the Sooners are one the top teams in the county again. However, they’re going through a quarterback shift as Heisman Trophy winner Baker Mayfield is in Cleveland now. Oklahoma tabs Texas A&M transfer Kyler Murray as the starter. But Murray may care more about baseball than football as he’s expected to attend spring training with the Oakland A’s in 2019.

Kiffin must rely on his offensive savvy and running back Devin Singletary to keep it close. FAU will struggle on defense, but they return 10 starters from last year and are moving to an attacking style of defense. Lastly, FAU cannot beat themselves via penalties and turnovers. Florida Atlantic must play a perfect game to have a chance, quite a tall task in week one with a “David vs. Goliath” scenario.

If the Owls can win or keep it close week one, they’ll have another chance to flex their muscle in week four on the road at #21 UCF. The Knights will be undefeated, making it one of the most important Group of Five games of the season. The winner of the week four matchup in Orlando will have the inside track to a birth in a NY6 game.

Florida Atlantic will lose no more than two games in 2018. Kiffin’s record at FAU would be 22-5 in two years in Boca Raton. Coming a long way from the 6-18 record the previous two years. Kiffin will get some calls from Power Five Schools.

It is official USF will be joined in the AAC by FAU, UNC, UAB, North Texas, UT-San Antonio and Rice in the reconstructed confernce. 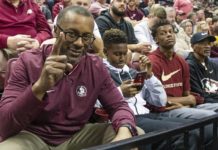 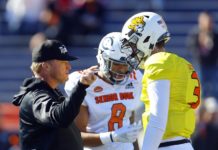 Florida Colleges Will Have Plenty Of Players At The Senior Bowl