It is all about the money.

Larry Scott is not going to be the Commissioner of the Pac-12 Conference much longer. Scott will be gone in June even though his contract was due to end in June, 2022. Scott seems to have committed one serious offense against the college presidents and chancellors who call the shots. He just did not get the conference the kind of TV money that the presidents and chancellors think should be coming to them. After all, the Pac 12 has schools in some rather large money markets, Los Angeles, San Francisco, Denver and Phoenix. But the Pac-12 just does not have a TV deal that measures up to the Southeast Conference or the Big Ten. That is a major problem as Scott found out. He has not kept up with the times and those good times may be over if the cord cutting trend continues and less and less people are spending money on cable, satellite or phone TV. But college presidents and chancellors remain hopefully the big checks will continue to roll in.

Of course, the NCAA doesn’t want to share any of its money with the stars of the show. The so-called “student-athletes” and has been fighting states in an effort to derail a movement that will see the athletes, the stars of the show, get paid for their likenesses. The term “student-athlete” did not exist when Walter Byers took the job at the helm of the NCAA in 1951. It would first appear a number of years later following the death of a college football player on the field. A Fort Lewis A & M student, Ray Dennison, died from injuries suffered in a game in 1955. Dennison’s widow sued for workman’s compensation in Colorado. She lost. Dennison was a student not an employee. The college sports business should be paying players. 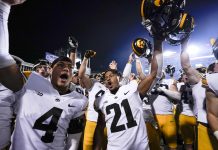