On today’s episode, Rock is talking about the small riot that ensued in the T-Mobile Arena after Khabib Nurmagomedov defeated Conor McGregor.  Was Khabib and/or Conor justified in their actions?

To the surprise of many college football fans, the Florida Gators defeated the #5 LSU Tigers.  What does Rock think of the job Dan Mullen has done in just his first year as the Gators coach?  The Noles blew a 20-point to the Miami Hurricanes, USF struggled against UMass, and UCF defeated a lowly SMU team.  Does this make the Gators the best college football team in the state?

Jason Floyd, The MMA Report – What is next for Khabib Nurmagomedov, Conor McGregor, and the UFC? 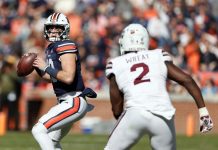