Coral Gables, FL — As Miami Hurricanes jump into full swing this week, head coach Mark Richt and his staff will have to make crucial decisions that will help shape the season.

The Canes held their first scrimmage of fall camp on Saturday at Hard Rock Stadium for an “in-game” feel. The format was first-team offense vs. second-team defense; second-team offense vs. the first-team defense. The ball was spotted at the offense’s own 25-yard line, 35-yard line, the 50-yard line, and the defense’s 40-yard line. All drives were designed eight-play drives. Miami then went to third down, working on third and medium and third and long. The Hurricanes finished with red-zone, and the ball spotted on the 16-yard line.

“I think we are in a good place,” Richt said. “Guys are fighting hard and working. After watching this tape, we will get closer to figuring out who can play and who can’t. The thing to remember with the young guys is that they can make a huge improvement from this week to next week.”

Picked to win the ACC Coastal again, the Canes must answer a few questions concerning the roster. Most questions surround the offense as the defensive will be better than last year, experienced, and loaded with talent!

Who Is The Real Malik Rosier?

Is he the quarterback that led Miami to a 10-0 start, beating Florida State for the first time in seven years? Alternatively, is he quarterback who lost his three games completing less than 50 percent of his passes?

After Miami’s disappointing end to the 2017 season, the future of Rosier was in question. However, at last month’s ACC Media Event Richt gave Rosier a favorable endorsement.

“If he doesn’t do the things that he did, we probably don’t win 10 games last year,” Richt said of Rosier in July. “He’s the starter. Malik’s the starter, and if something changes, I’ll let you know. … I don’t anticipate anybody knocking him out of the box right now.”

This season, Rosier will not get the chance to ease into the season. The Hurricanes face a tough LSU squad week one; ready to prove that SEC football is superior to the ACC.

The biggest question is if the Hurricanes struggle in week one or throughout the season, will Rosier have a leash and how long will it be?

How Will Richt Manage The Skill Position Depth On Offense?

The mark of a great team is not just talent, but the depth behind the talent. The Hurricanes are on they’re way to being a great team due to their talent and now depth due to Richt’s recruiting since taking over the program in 2016. Richt hauled in his best-recruiting classes yet, as Miami had the eighth-ranked class in 2018.

The running back room in Miami is getting crowded. Incumbent starter, Travis Homer racked up 966 yards at 5.9 yards per clip to go along with eight touchdowns. Homer will return the starter but will be pushed for playing time by the young studs behind him.

Sophomore running back DeeJay Dallas will see a significant increase in playing time as he catches the ball really well out of the backfield. Also, Richt will use Dallas in the wildcat package due to his time as a quarterback in high school.

Incoming freshman running back Lorenzo Lingard was the prize of Miami’s 2018 recruiting class. Lingard reportedly ran a 4.27 40-yard dash this summer; he will definitely challenge for playing time.

If Miami’s running back room in getting crowded, their receiver room is stuffed. However, it’s mostly potential due to only two receivers coming back from 2017 with more than 300 yards (Jeff Thomas, Ahmmond Richards). Thomas and Richards will provide big-play ability to Miami’s offense as Thomas averaged 22 yards per catch as a true freshman and Richards averages 18.8 yards a reception for his career.

The Canes expect a big year from Lawrence Cager. The junior from Towson, MD has been patient and now it’s his time. At 6 foot 5 inches, Rosier will look for Cager with 50/50 balls and the red zone. Cager caught two touchdown passes in Saturday’s scrimmage.

The Hurricanes run a pro-style offense; not many four and five-receiver sets. Playing time will be hard to come by after Cager, Thomas, and Richards. Sophomore Mike Harley will fight for playing time as he recorded nine receptions last season. Darrell Langham returns for his senior season. His two only two touchdowns last year saved Miami’s season with GW-catches vs. Florida State and Georgia Tech.

In today’s college football world, players are quick to transfer due to lack of playing time. Richt’s handling of the skill positions is crucial to the health of Miami’s future.

Can Miami’s Offensive Line Hold Up Against Stiffer Competition?

The Hurricanes’ offensive line is the weakest unit throughout the team. After struggling a bit in the spring, they’ve improved thus far during fall camp.

“The one unit all fall long has been really good. No complaints there. The twos, they’re struggling going against the best we’ve got. Those guys are pretty good, those rushers. Whether it’s just coming off the edge with speed or start out with speed and decide to go … they call it go from speed to power — you’re doing a speed rush and then you turn right into the guy and run him into the quarterback — I saw a few of those,” Richt said.”

Miami’s offensive line is solid barring injury. However, they will be tested right out the gate vs. LSU. The Tigers’ head coach, Ed Orgeron, is one of the top defensive line coaches in the country. Coach O is on the hot seat in 2018 and cannot afford to lose to Miami with an SEC schedule ahead of the Tigers.

Most noteworthy, including LSU, Miami will be favored in every regular season game this season. Bringing the Canes back to the ACC Championship in a rematch with Clemson. If Miami wants to get to the College Football Playoff, they must beat Clemson. Clemson’s defensive line features four players who will play on Sunday, all of whom could be first-round draft picks.

Miami is one of the few programs that use tight ends traditionally; on the end line, pass-catching, and blocking. Which is why Miami’s tight ends get drafted so often.

Heading into 2018 the TE position is a mystery. Due to Michael Irvin II’s season-ending injury, the Canes will rely on two true freshmen to hold down the middle of the field;  Brevin Jordan (Las Vegas, NV) and Will Mallory (Jacksonville, FL)

Jordan and Mallory struggled to block at times against Miami’s first-team defensive line in Saturday’s scrimmage. “We do use our tight ends to protect a lot and they are getting knocked around right now…It is guys like Joe Jackson being a grown man and those young guys still figuring it out.”

The young tight ends will have to learn and adjust on the fly as a date with LSU is just around the corner. If Mallory and Jordan continue to struggle, look for Miami to go towards a spread look and get more receivers involved. 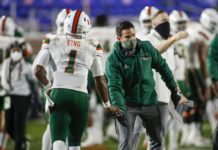 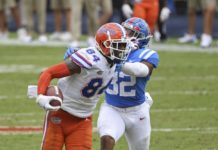