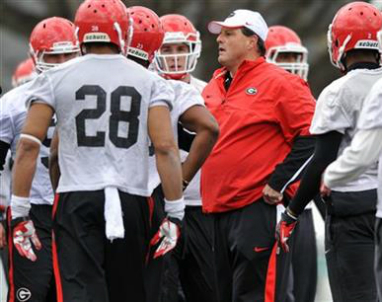 Miami announced Richt as its new football coach Friday, two days after striking a deal in principle with the former Georgia coach to take over the Hurricanes.

“Returning to `The U’ is truly an honor and I am humbled by the responsibility of leading our storied program,” said Richt, who played under Howard Schnellenberger at Miami in the early 1980s.

Richt’s first official order of business Friday was meeting his team, with players summoned to the football facility for an 8 a.m. introduction. The Hurricanes planned a news conference to announce Richt’s hiring later Friday morning, and the hope was that the 24th coach in Miami history could start recruiting later in the day.

Richt went 19-3 against Atlantic Coast Conference opponents when he was at Georgia, and Miami can only hope that trend continues. The Hurricanes moved into the ACC 12 seasons ago, and still are looking for their first league title.

“His passion for the game of football and for his student-athletes is evident in everything he does,” Miami athletic director Blake James said. “And we could not be more excited to welcome Mark and (his wife) Katharyn and their family to Coral Gables.”

Miami spent more than five weeks searching for a new permanent coach. When Richt and Georgia parted ways earlier this week, the Hurricanes wasted no time in making him their top choice.

“Coach Richt embodies the competitiveness, the integrity, the passion, the abilities and the experience to lead our young men to ACC and national championships and help them become men of character and success long after,” James said.

For Richt, who’s .740 career winning percentage is the fifth-best among active FBS coaches, it is a homecoming.

Coach Mark Richt holds a 145-51 overall record, which is the sixth-most among active coaches https://t.co/xvWep5a5PL

He was a teammate of fellow quarterbacks Jim Kelly, Vinny Testaverde and Bernie Kosar with the Hurricanes from 1980 through 1982, just before Miami would win the first of what became five national championships in a 19-season span. He’s also a native of nearby Boca Raton, and now returns to lead a program desperately seeking a return to national prominence.

Miami has gone since 2001 without a national title, since 2003 without a 10-win season and since 2006 without a bowl win. Richt’s mandate is simple: Change all that.

“I can’t wait to get started,” Richt said.

Richt replaces Al Golden, who was fired in late October midway through his fifth season. Golden inherited an absolute mess when he was hired, never being told Miami was under an NCAA investigation that was largely centered around the actions of a former booster and convicted Ponzi scheme architect who said he provided dozens of Hurricane athletes with benefits not permitted under college rules.

The scandal broke not long before Golden’s first game, with some effects still lingering today. Miami remains on NCAA probation, and will likely have to limit itself to 81 or 82 scholarships next season instead of the maximum allotment of 85.

But for the most part, the worst is over on that front for Miami.

Richt inherits a team that went 8-4 in this regular season, has an elite quarterback in Brad Kaaya, had 91 percent of its points this season come from players who could be back with the Hurricanes in 2016 if they so choose, and finished with four wins in five games under interim coach Larry Scott.

“We are blessed to have the opportunity to come to a world-class institution and world-renowned city,” Richt said.