CORAL GABLES, Fla. (AP) — No. 16 Miami Hurricanes game at Arkansas State on Saturday has been cancelled over concerns about Hurricane Irma, a powerful Category 5 storm that forecasters believe will affect Florida this weekend.

Getting to Arkansas for the game would not be the problem for the Miami Hurricanes. Getting back to Miami would be the potential issue, and the uncertainty over what will happen with the storm led to the decision to err on the side of caution.

“This is about what’s best for our students, coaching staff and their families,” Miami athletic director Blake James told The Associated Press. “We’re not confident that we were going to get back after the game and we weren’t going to leave our players stranded somewhere. There’s bigger things than football.”

The NFL also decided Wednesday to move the Tampa Bay at Miami game — originally scheduled for Sunday — to Nov. 19. That decision means the Dolphins and Bucs will play 16 consecutive weeks, starting in Week 2, since Week 11 was set to be the bye week for both clubs.

The Dolphins canceled practice for the rest of the week, and some players were looking to evacuate. So, too, were some members of the Miami Hurricanes’ women’s basketball team — they were heading to Georgia and out of Irma’s expected path. Miami has canceled classes until at least Monday.

Florida International’s home game with Alcorn State, scheduled for Saturday night, will not be played in Miami — and the teams were working Wednesday on a plan to meet at a neutral site on Friday.

No. 10 Florida State and No. 22 Florida, both scheduled to play at home on Saturday night, are also monitoring Irma and reviewing options. Moving kickoffs to earlier in the day were under consideration.

Dozens of high school football games in Florida were either cancelled or rescheduled, and Miami also cancelled two volleyball matches, two women’s soccer games and a cross country meet because of the expected storm. 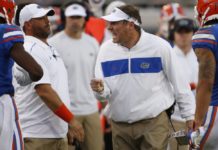