The Miami Hurricanes wasted little time showing their swagger as they forced a fumble on the West Virginia’s opening drive in Mountaineer territory. However, the Hurricanes were unable to do anything with it and were forced to punt. On their second possession West Virginia was finally able to move the ball picking up 2 first downs before Miami began to lay the wood with back to back sacks, ending the drive. The Canes went 3 and out on their next possession. This g however was the turning point of the quarter as West Virginia, marched 39 yards in 4 plays that was capped by a 6-yard touchdown run from Kennedy McCoy. Following the touchdown Miami’s offense stalled once again and the Canes punted it away. The Canes ended the first quarter with under 20 yards of total offense.

In the second quarter the Canes struggles continued as they went 3 and out on their first possession of the 2nd. Meanwhile the Mountaineers continued their pattern of picking up a first down or two before having their drive stall. The Canes got bailed out big time when a Brad Kaaya interception was negated by a defensive pass interference call. This gave Miami their best field position of the game with the ball on their own 48-yard line. The Canes technically got passed the 50-yard line on a first down, but an unsportsmanlike conduct penalty after the play moved the ball back into Miami territory. The Canes punted soon after, pinning West Virginia deep in their own territory. Miami took over around the midfield and quickly scored on a 51-yard touchdown pass to Ahmmom Richards, to tie the game at 7. At this point Miami’s defense started to come to life with several tackles for a loss, which prompted a Mountaineer punt. On their very next possession, Miami was knocking on the doorstep once again after a 30 yard pass from Kaaya. The Canes made it 14-7 when Kaaya found Malcom Lewis wide open in the back of the end zone. The Canes kept their foot on the gas as they added one last touchdown in the final minute of the first half to take a 21-7 lead. The Canes went 70 yards in 52 seconds, including a 26-yard touchdown pass to Braxton Berrios. The first half was a tale of two quarters for Miami, who erupted for 3 touchdowns and nearly 200 yards in the 2nd quarter.

Miami kept the momentum going in the 3rd quarter when they continued to march down the field with ease. Miami found the end zone once again on a 23-yard completion to David Njoku to take a 28-7 lead. The Mountaineers finally awoke from their slumber in the 3rd, when they punched it in from 4 yards out to make it 28-14. Miami responded with a 30-yard field goal to go up 31-14. 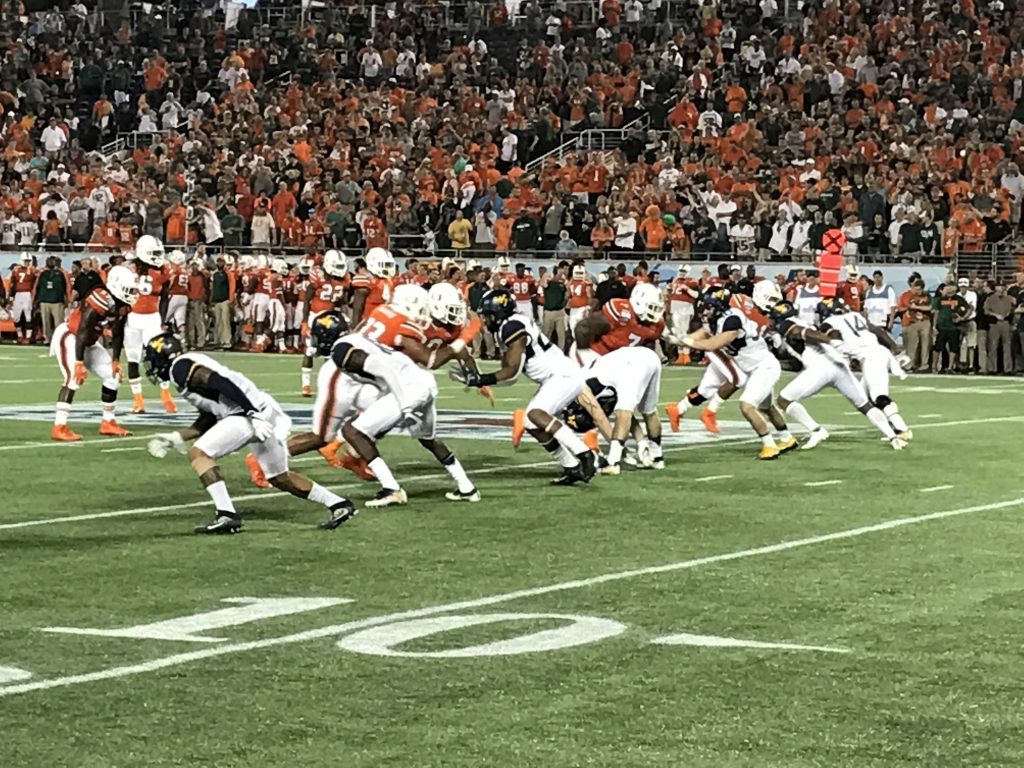 In the 4th West Virginia went for it on 4th down from the 49-yard line, only to have a Skyler Howard pass fall short. As the fourth wound down both teams exchanged punts but there was not more scoring from either team. West Virginia finally conceded the victory as they punted the ball away one last final time with just under a minute left in the game.

The victory for Miami is their first since 2006, when they won the Sun Bowl. It was also sweet for the Canes to win the Russell Athletic Bowl as this is the same place that this year’s seniors lost as freshman to Louisville. The victory should also go a long way in helping the Canes with recruiting.

Miami will face the best Pitt in years and the Panthers have their sights on an ACC Championship.