Michigan Looks to Bounce Back from 2013 Outback Bowl Game

We are just hours away from the 2018 Outback Bowl between the Michigan Wolverines and the South Carolina Gamecocks. This year’s bowl features two hungry teams who have identical 8-4 records. Both programs come in looking to assert themselves into the national spotlight with a win on New Year’s Day as they build momentum towards next season. Now if this matchup seems familiar, that’s because these two teams met in the 2013 Outback Bowl, with the Gamecocks winning 33-28. So, will history be on South Carolina’s side of will the Wolverines get some revenge? Let’s take a look now at how this year’s matchup shapes up.

Michigan:
The Wolverines come into this contest as the 30th ranked team by the AP and 4th place in the Big Ten Conference. Michigan is led by quarterback Brandon Peters, who is looking to solidify his status as the starter. Peters will have some stiff competition next season to be the starting QB, and a win over South Carolina will go a long way in helping his cause. On the ground, it is all about Karan Higdon for the Wolverines. Higdon was voted All-Big Ten third team with 11 touchdowns and 929 yards on 147 carries this season.

Defensively Michigan is loaded with playmakers as they feature four players in their front 7 that were voted All-Big Ten first team. Those players include DL Mo Hurst, DL Rashan Gary, DL Chase Winovich, and LB Devin Bush. Collectively Michigan gives up 19.4 points a game and ranks third in the Big Ten for total defense.
If Michigan is going to win, they will need their defense to come up with some turnovers. This season the Wolverines have forced 14 turnovers so South Carolina will certainly have their hands full will this “rabid” bunch of Wolverines.

South Carolina:
For the Gamecocks this game is chance to show that they are a better team than their record would indicate. Yes, the Gamecocks are 8-4, but two of those losses were at the hands of Clemson and Georgia, the first and third ranked teams in the country. South Carolina also boasts an above average defense that was able to hold their own playing in the SEC, where they gave up just three more points a game than Michigan. The Gamecocks also have 21 turnovers to their name, so this game could easily become a defensive battle.

Offensively its QB Jake Bentley leading the show for South Carolina. Bentley is just shy of 4,000 yards on the season and is second all-time in career completion percentage for the Gamecocks. On the ground A.J. Turner will be turning some heads for South Carolina. The redshirt sophomore has averaged over 6 yards a carry during his last six games.

More than likely this year’s Outback Bowl will be a close one with the turnover battle playing a key role in determining the outcome. Michigan is currently the favorite with the odds makers, but it would not be surprising if South Carolina pulled the upset when these two teams square off at noon on New Year’s Day. 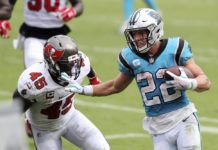 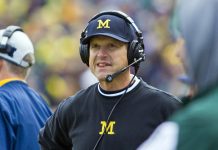 Harbaugh to stay at Michigan while the Vikings will hire the Rams OC after the Super Bowl. 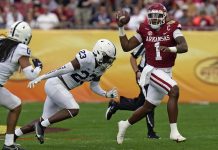