But players can make outside money.

It appears the NCAA has accepted that some of its student-athletes can be paid. The NCAA has released a draft of an 18 1/2-page constitution that could be acted upon in the beginning of 2022. The new constitution will include a provision that it is perfectly legal for athletes to be compensated for the use of their names, images and likenesses. But the NCAA continues to say no when it comes to the colleges paying athletes. The scholarship is good enough. There is money available to the players. College conferences are realigning to chase television and marketing money. The new round of conference realignment started during the summer when the Southeastern Conference enticed the University of Oklahoma and the University of Texas into the league. Other conferences reloaded. It was not done for academics. The Walt Disney Company’s ESPN along with FOX, Turner Sports, CBS Sports and others have an interest in college sports. The networks are partners and can call shots. Between college football and college basketball billions of dollars of TV money flows into the industry.

The NCAA didn’t want to share any of its money with the stars of the show, “student-athletes”. The NCAA had been fighting states in an effort to derail a movement that saw the athletes get paid for their likenesses. The term “student-athlete” did not exist when Walter Byers took the job at the helm of the NCAA in 1951. It would first appear a number of years later following the death of a college football player on the field. A Fort Lewis A & M student, Ray Dennison, died from injuries suffered in a game in 1955. Dennison’s widow sued for workman’s compensation in Colorado. She lost. Dennison was a student not an employee. The college sports business should be paying players. 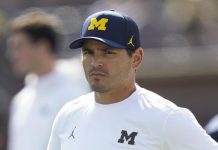