It is time for the college football championship game in Santa Clara, California. So let’s take a look. The pilot and co-pilot of the planes that took the University of Alabama and Clemson University teams to San Jose got paid. The bus drivers taking the teams from the airport to the hotel and practice and the stadium were paid. Housing, paid. The head of security and that team at the corporate named stadium, paid. The corporate named stadium officials gave money to the people who allow the name on the building. The TV and radio people paid to broadcast the game. Their checks are good. The announcers and production crew paid. Marketing partners who want to be associated with the game have paid for that right. People who are attending the game, someone paid for those tickets. The players? Nothing. This is game 14 for both teams, 14 weeks of practice, a couple weeks of training camp and those so-called voluntary practices. It has been a full time job since last summer or maybe last spring. They get a scholarship.

Alabama coach Nick Saban is by far the highest paid public employee in the state making millions. Clemson coach Dabo Swinney makes millions off his players’ collective backs but doesn’t think his players need to get paid. In 2014, Swinney said, “We try to teach our guys, use football to create the opportunities. Take advantage of the platform and the brand and the marketing you have available to you. But as far as paying players, professionalizing college athletics, that’s where you lose me. I’ll go do something else, because there’s enough entitlement in this world as it is.” Swinney gets paid millions which makes it a profession. Swinney is the poster boy for what is exactly wrong with college sports, coaches making big salaries off of unpaid workers. 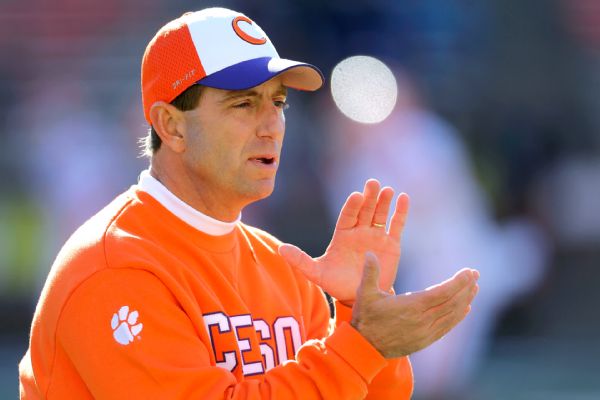