Imagine that using other people’s money.

It is a fact that President Ronald Reagan and Congress built the American cable TV industry. The passage of the 1984 Cable TV Act fundamentally changed how cable TV networks got consumer funding. A tier made of existing cable TV networks was created and the consumer would either buy the entire tier or ignore it. That tier included ESPN, CNN and the Weather Channel and because so many people said yes to the tier those networks started making money. Other networks, including regional sports outlets, got onto that tier and sports suddenly had a major infusion of money. ESPN would become the most expensive network and since the consumer had no idea what the cost of ESPN or any other network really was, bills are not itemized, there was no way of knowing just what companies like Disney were doing with consumer money. But Dave Brandon did come up with one instance where people who were forced to buy the extended tier who never watched ESPN did pay for improvements at a college football stadium.

Brandon was the Athletic Director at the University of Michigan from 2010 to 2014. Brandon decided it was time to get lights for the stadium and did so. But no one knew where the funding for the expenditure was obtained. Brandon revealed recently on Jim Harbaugh’s “Attack Each Day” podcast that the Walt Disney Company owned-ESPN paid for the permanent lights. The University of Michigan claimed that the project cost $1.8 million with “funding provided from athletic department resources.”  Brandon admitted that “I actually got ESPN to pay for it. It didn’t cost a dime. All we had to do was promise to play a night game once a year.” Disney got other people’s money to provide lighting for a TV show which probably was not the original intent of the Cable TV Act of 1984. 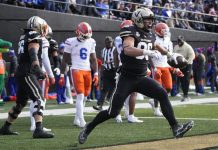