What is Mark Emmert’s actual job?

The President of the NCAA Dr. Mark Emmert is a tough talking leader who seems to fold on every major issue facing college sports except one. Making sure players don’t get paid for their athletic endeavors. That apparently is where the buck stops for Dr. Emmert and his bosses, the college and university chancellors, presidents and trustees. Dr. Emmert and his NCAA bosses sort of imposed penalties on Penn State following the outcome of the Jerry Sandusky sexual abuse court cases but the sanctions had little bite to them and eventually some of them were lifted before the expiration date. The NCAA was noticeably AWOL from the Baylor sexual abuse allegations.

Dr. Emmert and his NCAA bosses have a significant problem at Michigan State University. It is alleged that the East Lansing school paid a New York public relations firm a half million dollars to monitor the social media activities of Dr. Larry Nassar’s victims. Not only were the victim’s social media monitored but the snooping extended to the media and those who reported on the allegations and Nassar’s trial. The PR company, Weber Shandwick, assigned 16 people to monitor social media according to the Lansing State Journal. Nassar has been sentenced. Nassar’s boss at the university William Strampel, a dean at the school, was arrested in March on charges including sexual assault. Michigan State officials paid a firm to spy on victims and a list of reporters. Very strange. The question of imposing sanctions on the Michigan State University sports program will come up and the NCAA has always managed to try and stay out of sexual abuse allegations leaving to individual schools to hand out punishment. The exception was Penn State and Sandusky where Dr. Emmert acted and said in 2012. “Football will never again be placed ahead of education.” Michigan State went to extreme lengths to prove otherwise and protect its sports program and money. 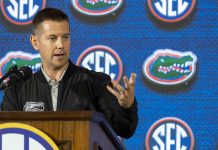