Notre Dame has 21 less victories in the record book while Baylor University is dealing with a serious cultural issue in the school’s athletic program. Notre Dame’s problem is academic cheating in the football program, Baylor’s problem seems to be sexual assault. The NCAA apparently can live with Baylor dealing with allegations of sexual assault and the school apparently paying off some victims to just go away. The NCAA cannot live with academic cheating and Notre Dame is paying the price although the school plans to appeal the NCAA decision.

Welcome to the NCAA world where priorities seem askew. Baylor cleaned house once the news of the sexual assaults were reported.  There was a new coach in place, Ken Starr who was the chancellor was demoted and the university was hoping to start a recovery from the Art Briles era, a time of winning football, a new $266 million stadium and a few sexual assault cases that were not investigated which is kind of ironic. You see federal independent counsellor Ken Starr headed the investigation of President Bill Clinton’s dealings of Clinton ally Vince Foster who committed suicide,  then moved onto a Clinton real estate deal named Whitewater and somehow ended up probing an affair between Clinton and Monica Lewinsky that included a blue semen stained dress and the impeachment of Clinton back in the 1990s. Briles came to Baylor in 2007 and turned a losing program into a winning program and that counts in college football because despite whatever NCAA President Mark Emmert and the rest of the college football crowd says about football never being the most important aspect of a school, big time college football is the most important aspect of a school.

The school hired an outside law firm to handle the investigation of the allegations which came back with a finding that led to the dismissal of Briles. The big time college sports industry is filled with coaches put on pedestals because they have the ability to recruit the best players and win consistently. The NCAA, the governing body of college sports, seems to make up rules as it goes with one thing in mind. Protect the school and the program and don’t worry about the players. 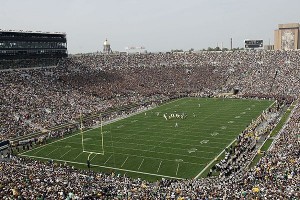 Notre Dame has been hit hard for academic violations by the NCAA but the college sports governing body seems to be asleep at the wheel in sanctioning Baylor for a settlement of a sexual assault case.