Texas Governor Greg Abbott has opened the door for Major League and college sports to make some revenue from people in the stands. In Iowa, Jamie Pollard who is the Athletic Director of Iowa State University envisions having football games at the campus stadium this fall with about 50 percent capacity or about 30,000 customers in the stands for each game. Pollard did issue a proviso though. “After consulting with campus officials, we have concluded there is no reasonable way to guarantee that no one will contract the COVID-19 virus. Trying to adhere to a standard of absolute protection is simply not reasonable. We would either be held accountable for being far too restrictive or, more likely, not restrictive enough.” Pollard is trying have it both ways, have people in the stadium but not being responsible if some of those people get the virus while attending an Iowa State football game. The problem is no one knows the route COVID-19 is taking and if there will be a much bigger outbreak during the fall. It also appears there is no uniformity within the college football industry when it comes to college football this fall. Can games even be played has not been answered although various school conferences have plans for the “student-athletes” to start training for the football season in June.

The Texas Governor Abbott is on record saying that he thinks will there be college football in Texas this fall and there will be people in outdoor facilities. If Major League Baseball and Major League Soccer, wanted to play games in Texas today, the leagues could have people in the seats. The attendance would be capped at 25 percent of venue capacity with social distancing. The PGA is returning on June 11 with a four-day golf tournament In Fort Worth, Texas. There will be no fans attending the event. 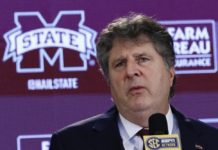 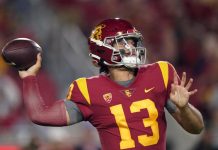