MIAMI GARDENS, Fla. (AP) — D’Eriq King is having a season unlike almost any other quarterback in Miami history. Same goes for North Carolina’s Sam Howell, who has his name in the Tar Heel record book more than a few times already.

And neither is even guaranteed a spot on the All-ACC team this season.

Quarterback play in the Atlantic Coast Conference has been stellar in 2020, with Clemson’s Trevor Lawrence and Notre Dame’s Ian Book among the nation’s best. They’re likely to grab two of the three All-ACC roster spots this season, which means either King or Howell — who meet Saturday when No. 9 Miami (8-1, 7-1 ACC, No. 10 College Football Playoff) plays host to No. 20 North Carolina (7-3, 6-3 ACC, No. 17 CFP) — will likely find himself on the league’s honorable mention list.

Given the years both have had, that hardly seems right.

“You would have to argue that our league may be the best league in the country,” North Carolina coach Mack Brown said. “And to do that, you’ve got to have the top quarterbacks. So, I think without question, these guys are good.”

The numbers prove that across the board, including for King and Howell.

King has completed 64% of his passes this season, with 20 touchdowns and four interceptions, plus has rushed for another four scores. He’s 15 pass attempts from 300 this season, which will qualify him for Miami’s all-time list — and he’s in line to take over as the Hurricanes’ career accuracy leader, topping the mark that Bernie Kosar has held for 36 years.

“I’m all about winning,” King said. “We can win by half a point. I don’t care. I just want to go out there and just have one more point than they do at the end of the game.”

Howell has completed almost 69% of his passes, putting him just a fraction of a percentage away from Chris Kupec’s single-season Tar Heels mark of 69.3% that has stood for 46 years. And his 64 touchdown passes — in two years — is four shy of matching the North Carolina career mark.

“I’m excited for the matchup,” Howell said. “I enjoy playing against good quarterbacks.”

Some of what to know going into Saturday:

North Carolina has played 23 games over the past two seasons and 13 of them have been decided by seven points or less, with the Tar Heels going 5-8 in those games. In fact, the only loss North Carolina has had in Brown’s second stint as coach that was by more than a touchdown was the 31-17 loss to No. 2 Notre Dame on Nov. 27.

North Carolina beat Miami 28-25 last season, with Howell’s go-ahead TD throw to Dazz Newsome with 61 seconds left being the gamewinner. Howell also had a big completion on 4th-and-17 to extend that final drive and lead the Heels to a win in a game where they led 10-0 after eight plays but needed to rally — and got help from Miami’s then-woeful kicking game, with two missed field goals and a blocked extra point. “Our players will be highly motivated for North Carolina coming into our stadium, no doubt about that,” Miami coach Manny Diaz said.

Miami hasn’t played a home game in seven weeks; the Hurricanes last played at Hard Rock Stadium on Oct. 24 against Virginia, then had three road games wedged around a scheduled bye week and two other weeks off because of COVID-19 issues. The last time Miami didn’t play a home game in November was 1979, a year where the Hurricanes had two road games that month preceding a neutral-site matchup against Notre Dame in Tokyo.

The Tar Heels have had trouble defending mobile quarterbacks in all three of their losses. They surrendered 107 yards rushing and two touchdowns to Florida State’s Jordan Travis on Oct. 17. Two weeks later, they gave up 66 yards rushing and a TD to Virginia’s Brennan Armstrong. And against Notre Dame, UNC defenders repeatedly struggled to bring down Book — and Tar Heels defensive coordinator Jay Bateman likens King’s game to Book’s. 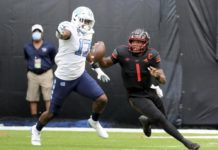