Winnersandwhiners.com is the top source for free betting information

Just two weeks ago, the Utes ended the Ducks’ national playoff hopes by taking them to the woodshed and beating them 38-7 in Utah. The Ducks bounced back to beat arch-rival Oregon State in the “Civil War” 38-29 last week, and Utah is coming off a 28-13 win over Colorado.

Now the big question is, how much different will things be with the Ducks and Utes meeting again?

The Oregon Ducks have had a successful season, but it could have been so much more. They won their first four games, highlighted by a 35-28 road win as a 15 point underdog against Ohio State. On October 2, Oregon suffered its first defeat 24-17 as an 8.5 point favorite against Stanford. The Ducks would bounce back to win their next five games and get up to No. 3 in the College Football Playoff Rankings before they were dominated by Utah.

Oregon trailed Utah 28-0 at the half and scored its only touchdown on a 36-yard touchdown pass from Anthony Brown to Devon Williams in the third quarter. For the game, the Ducks gained 294 yards. Quarterback Anthony Brown completed 17 of 35 passes for 231 yards with just one passing touchdown. The running game picked up 63 rushing yards on 23 attempts against the Utes.

On the season Brown, a 6’3 senior has completed 64.4% of his passes for 2,536 yards with 15 touchdowns and four interceptions and added 642 yards and nine touchdowns with his legs. Last week against Oregon State Brown had a strong bounce back game and threw for 275 yards with two touchdowns and ran for another 83 yards with another score. Travis Dye is the team’s rushing leader with 1,036 yards on 5.8 yards per attempt with 14 touchdowns. Dye ran the ball 20 times for 99 yards with two touchdowns against Oregon State. In the previous game against Utah, Dye only carried the ball six times for a season-low of 29 rushing yards.

Cameron has helped Rise the Utes

With the way the season started, it may come as a surprise that Utah is playing for the Pac-12 title. The Utes lost two of their first three games, and Charlie Brewer the starting quarterback in those first three games, left the program after being benched in a 33-31 overtime loss as an eight-point road favorite against San Diego State. Sophomore quarterback Cameron Rising has been the man since and led the Utes to wins in seven of their last eight games.

On the season Rising is completing 62.8% of his passes for 2,109 yards with 17 touchdowns and three interceptions. Two weeks ago, Rising was able to manage the game against Oregon completing 10 of 18 passes for 178 yards in the win.

The Utes running game was highly successful in the first game against the Ducks, as they rushed 50 times for 208 yards with four touchdowns. Tavion Thomas, a sophomore running back carried the rock 21 times against Oregon and picked up 94 yards and three touchdowns.

On the season Thomas has run for 978 yards with 18 touchdowns on 5.8 yards per attempt.

How much of a difference will 13 days make? Oregon was the 3.5 point favorite that lost by 31 the first time they played Utah. This time around the game will be played on a neutral field instead of Utah, so that should help the Ducks, but I believe this is still a bad matchup for them. Utah exposed the Ducks in the first win by being more physical and pushing them around, by running the ball 50 times compared to just 18 passes. Utah did return a punt for a touchdown in the first game, but neither team committed any turnovers.

I have to back Utah here. I expect Oregon to play better this time around, but I don’t think they’ll be able to match Utah’s physicality. From the first matchup, the Utes are just the better team head-to-head.

David Delano is a Bowling Green State University graduate with a passion for sports, traveling, and music. David loves to handicap MLB, NFL, NCAAF, NCAAB, NBA, WNBA, and is also a big fan of boxing and track and field. Over the years, David has worn several hats in the sports world, from being behind the camera to writing, filming, editing, scouting, and coaching, along with servicing his clients as a sports handicapper.  He is also an expert sports bettor. We are glad to have David on our Winners & Whiners team, and we recommend that you follow along with him every day.

Ukraine Throws Its Hat In The 2030 Winter Olympics Ring 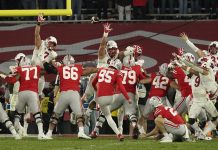 Rose Bowl: Game of the day sees Ohio State rally to beat a gutsy Utah team in a wild one 48-45 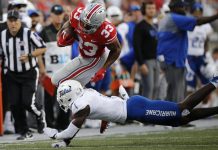 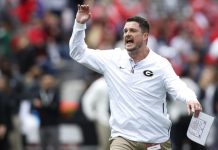