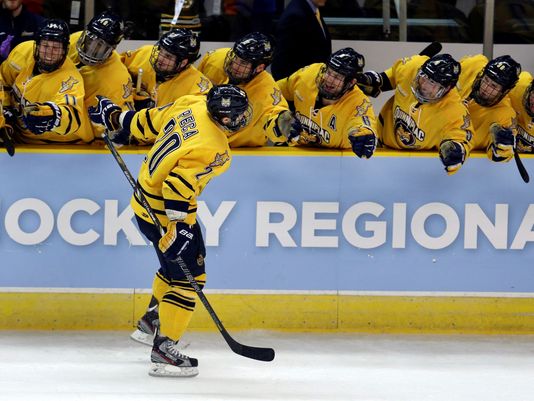 The Frozen Four kicked off Thursday night with a double header that saw Quinnipiac take down Boston College and North Dakota slip past Denver.

Rand Peckhold’s Quinnipiac team entered Thursday night as the favorite, on the heels of their 4th NCAA Tournament appearance in 4 years and their second Frozen Four in that span. Both the Bobcats and the BC Eagles came out in the first period guns blazing. Quinnipiac capitalized on what may have been nerves on the Boston side of the puck and scored 2 goals within the first 10 minutes. The first came at the 2:31 mark, scored by Sophomore defenseman Kevin McKernan and the 2nd just 5 minutes later to Sophomore left wing Andrew Taverner.

Despite Quinnipiac’s dominating forecheck and strong shot blocking, BC responded with a goal of their own just 23 seconds into the 2nd period, scored by 2014 1st round draft pick Alex Tuch. Tuch’s goal was the fastest goal to open a period since 2007 when Maine’s Keith Johnson landed one in the back of the net at the 0:23 mark. The Bobcats landed a goal from right wing Landon Smith in the 2nd period to take a 3-1 lead. It wasn’t until 5 minutes into the 3rd period that the Eagles managed to respond, knocking one past goalie Michael Gartieg to move the Bobcats lead to 1 but the equalizing goal never came and the Quinnipiac back line held off the Eagles to take a 3-2 win and advance to their second national title game in school history.

After the game, Quinnipiac head coach Rand Peckhold harped on his team’s ‘compete factor,’ saying, “If I want to slow them down and we’re not going to compete as hard, we’ll probably have more poise. But I think we’re good because of that compete. We’ve got some kids, they’re willing to do anything to win. They’re selfless. Some of the shots — like Tommy Schutt had a huge shot block at the end, no fear, he’s going to drop drown and eat that puck.”

The second game of Thursday’s double header saw the Fighting Hawks and the Pioneers battling it out for their spot in the national championship. North Dakota, known for being an extremely well-conditioned team came out fast. Both teams ended the first period with 4 shots on goal but none of them finding the back of the net. It wasn’t until the 1 minute mark of the 2nd period that Senior Drake Caggiula gave North Dakota their first lead, going up 1-0 on a perfect 2 on 1 goal.

5 minutes later, Caggiula scored his second goal of the game to take North Dakota up 2-0. Denver came out of the intermission strong though and within the first 11 minutes, managed to land 2 equalizing goals from Will Butcher and Matt Vanhooris. With just a minute left in the game, it looked as though extra hockey would end up on the schedule but with just 57 seconds left in the game, North Dakota’s Nick Schmaltz scored the game winner. Denver’s last second attempts to get an equalizer off before the buzzer sounded were thwarted by an empty net goal from Rhett Gardner that ended the game, ND winning 4-2.

After the game North Dakota head coach Brad Berry, in his first year at the helm for the Fighting Hawks, said, “Our guys played well. Fortunate to move on. We said it early in the year in August, we have goals in front of us, and we want to check off all the boxes. Our last checked box was to play in the last game on April 9th here in Tampa Bay, and we want to check off that box with a win.”